Some fighters are gifted with natural punching power while others have to follow a specific type of training regime and abide by the correct set of techniques to improve theirs.

The British heavyweight phenom known as Anthony Joshua has both. He’s a physical specimen to behold and his speed, power and footwork are extraordinary for a man his size.

If you know the kind of work he puts in to get all these attritutes, you’d probably want to follow suit.

You’ve likely seen a variation of this exercise before as it’s a common exercise for boxers and MMA fighters. Some people use a sledgehammer to hit a large tyre that’s laid down flat on the floor but in the clip above, Anthony Joshua uses a baseball bat to a securely placed tyre that stands upwards.

This exercise works much of your entire body because the motion requires you to twist at your hips, rotate your shoulders and then tense your forearms and hands in one explosive action.

An advantage for using a baseball as opposed to a sledgehammer would be to work on the speed and endurance of your arms as you’re able to do higher reps at a much faster pace. This is also the case with a lightweight sledgehammer rather than a heavy one.

Remember, using a heavier sledgehammer does not equal more punching power. Quite the opposite infact because the more velocity you’re able to generate combined with proper technique, the harder the impact will be at a specific pinpoint.

Here’s an very effective exercise that anyone can perform. Instead of doing a normal push up, there’s an added jump you need to do by using both arms and landing onto a slightly raised platform, in AJ’s case it’s a step box.

It’s a lot more difficult than your ordinary push up but the added jump helps to strengthen your fast twitch muscle fibres which enables you to execute explosive movements better.

If you ever find your arms tiring too quickly when you’re hitting the heavy bag or sparring, then heavy rope training should be a staple in your workout. It’s become increasingly popular among combat sports participants because it targets a multitude of different muscles and increases arm endurance.

You can maneuver the rope in different ways – Double waves, alternating waves, slams, side-to-side among others. It’s quite a simple exercise but your heart race will soar and your muscles will quickly tone after continously doing it for a while.

You know what is much more versatile, less prone to giving injuries and a lot cheaper than weights?

A set of resistance bands.

It’s no wonder why so many boxers and MMA fighters incorporate them into their workouts. They’re not stressful on your joints and they’re compact so that you can practically take them anywhere with you.

They allow better control of resistance and focus on a specific area which enables muscle growth and improves your fast twitch muscles. For atheletes such as Anthony Joshua, they excel in areas where more dynamic movement is involved such as side stepping, rapid punching and jumping.

Just make sure you get yourself a good quality set of resistance bands because they’re constructed of sturdier materials that can withstand even the most extreme workouts.

In physically demanding sports such as rugby, American football, wrestling and boxing, it’s highly beneficial and in most cases paramount, that you have strength to push and pull your opponent. This machine helps you to develop the full body strength needed to do just that.

You have to make use of mainly your legs to push this machine a certain distance and then either pull it back with a rope or chained handles, or push it back the other way. You can increase the distance or weight on the sled as you improve.

Failure to work on this area often means that you’ll be the one getting pushed and pulled around instead which can put a dent in one’s confidence and sapp your energy. 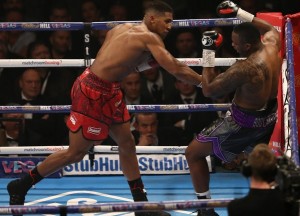 A barbell squat is a common exercise you’ll see performed in the gym. It takes a bit of practice to get the right technique and you should always begin with low weights. This exercise primarily targets your quads and core.

Anthony Joshua takes it a step further by performing a barbell clean and press with more emphasis on the squat. By doing so, he’s now working the muscles around his shoulders as well as his lower body.

It’s an explosive maneuver that targets your lower and upper body, ideal for atheletes competing in explosive sports. This is an advanced exercise so it’s ideal to get the technique correct with just the barbell alone before adding weights.

For more explosiveness, AJ adds a small jump towards the end of a rep. You’ll also notice in the video that he’s not using anything to support the barbell and there’s also a resistance band wraped around it.

An ordinary barbell single leg squat is difficult enough but this unique twist that AJ (most likely his strength and conditioning coach) performs is recommended to be done in supervision.

This is a common technique for boxers to increase those fast twitch muscles. Use a medicine ball that’s relative to your size and weight and throw it against the wall or a large heavy bag as hard as you can.

There are three things you need to make sure of before you do this:

A cable fly machine allows you to perform some really dynamic upper body workouts. While Anthony Joshua doesn’t perform your typical cable fly exercise where much of the focus is on your pectorial muscles, he performs it in manner that’s ideal for boxers.

It’s an explosive and simulatenous push and pull motion that puts the emphasis on the action that mimics a punch. Ideal if you’re looking to increase your speed and punching power.

An exercise that replicates an upward punching motion is the single or double armed barbell push press which is a staple among many fighter’s exercise routines. It targets the chest, shoulders and arms and is an excellent endurance exercise.