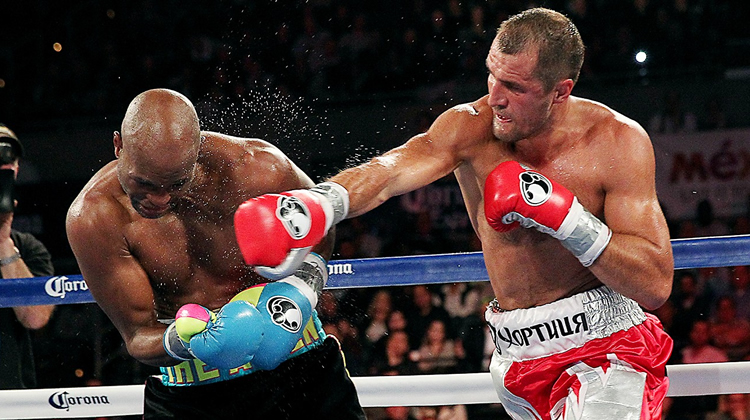 Sergey Kovalev, the man they call the ‘Krusher’, has led a destructive path through boxing’s light heavyweight division after a successful amateur career. However, it was only in the past couple years that he began making big noise in boxing and becoming a real force to be reckoned with.

He will be facing Bernard Hopkins on November 8th, in one of the year’s biggest fights and a showdown of youth and power vs experience and boxing IQ. Before that happens, I will be breaking down the boxing abilities of Kovalev, which may lead him to success next week. Here are the top 5 Sergey Kovalev boxing techniques.

While Kovalev as a very good jab when he uses it to set up his punches, his most effective jab comes immediately after he throws the cross. It shoots out like a dart and is so unexpected because normally, the lead hook would follow the cross.

Just as his opponents think they’re out of range from the dangerous hook, Kovalev’s power jab hits them with such speed and force that it completely stuns them, and has even scored him knockdowns and knockouts.

In the clip for this example, you see Kovalev throwing a 1-2 feint which pushes the opponent Cedric Agnew on the backfoot, which Kovalev follows up with a 1-2-1. The first jab and straight right don’t appear to have much force behind them, but it’s still enough to push Agnew, back in a straight line which then prompts Kovalev to leap in slightly from his left side with his power jab.

The straight right (aka. the cross) is perhaps Kovalev’s most dangerous weapon. It shoots out fast and forceful, and when used with his power jab as either a 1-2 or 1-2-1, it becomes a very effective combination since both punches have bad intentions behind them.

In the first clip for this punch, Kovalev has his opponent Campillo hurt, and instead of going for the head immediately, he throws a left hook to the body followed by a left hook upstairs, a short straight right, left hook upstairs again which backs Campillo off and creates a distance and opening that allows Kovalev to throw his cross to the head with enough force and accuracy to put Campillo down.

Kovalev also mixes it well to the head and to the body, where he has hurt and stopped his opponents that way. He can also lead with the straight right, and will even counter with it if his opponents fall short or miss with their jab.

On the clip to the right, Kovalev edges forward ever so subtly to get within range while locking eyes with Caparello in order not to give away his next move, and then he pinpoints a quick straight right to Caparello’s solar plexus which puts him down.

One of the signs of a good boxer is their ability to use subtle feints to create openings. Kovalev does this a lot, and it’s an underrated aspect of his game which many people fail to see. He uses slight foot movements to make his opponent think he’s going to attack, which compliments his style since he almost always attacks from mid-range.

Take the example clip above, Kovalev has Nathan Cleverly hurt and in survival mode, so to try and finish him off, he takes a small step forward then bounces back, which makes Cleverly lean forward to try and grab Kovalev leaving himself open, which Kovalev swiftly responds with a straight right followed by a barrage of punches.

Kovalev also likes to throw punch feints where he may throw a jab or right hand feint (as seen in the first clip for number 2) which makes his opponent think he’s going for their head, and then he’ll throw to the body instead.

Much of Kovalev’s defense heavily depends on whether he’s out of range or not. He stands straight up and doesn’t like to keep a high guard, often dropping his lead hand making him open for an overhand right. Fortunately for him, there has been no one as of yet to land this punch consistently or hard enough to make him pay for this glaring weakness.

However, Kovalev does measure distance very well, as he will take a step back to avoid punches while slipping punches with head movement, or he will take small steps forward to get within attacking distance. He also utilizes his footwork well by occasionally bouncing in and out of range to fluidly switch from offense to defense, which is necessary since he does his best work when he’s in mid-range.

A flurry usually consists of throwing a series of jabs and crosses in succession when the opponent is backed against the ropes or has their guard up. But let’s face it, most fighters who do throw flurries have very little power and accuracy behind those punches to do any real damage.

Kovalev’s flurries on the other hand can be described as organized chaos. They’re not only powerful, but also accurate to the point where his opponents often don’t try to counter in fear of getting hit.