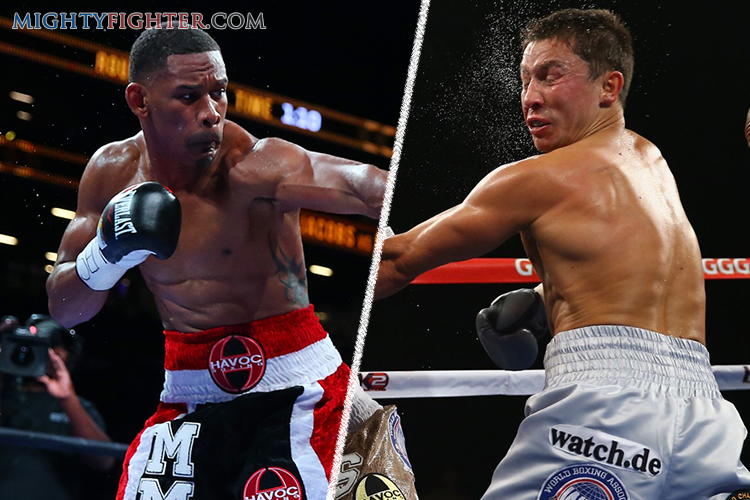 If the ‘Miracle Man’ Danny Jacobs is to beat the monster known as ‘GGG’ Gennady Golovkin, then it has to be by knockout.

Forget about outboxing the man that has an amateur record of 345 wins and only 8 losses (or 5 depending on who you believe). You can forget about a hit and hold strategy against the seemingly stronger, more resilient and better stamina man too.

So how is Jacobs going to knock out iron chinned and boulder fisted Gennady Golovin?

I’m glad you asked. Below are 3 of the most plausible ways cancer survivor and all round respectable good guy Danny Jacobs can achieve this feat.

Fighting fire with fire with GGG!? You must be crazy!

And it’s true, you have to be somewhat crazy to attempt to put Golovkin under pressure. But these are the facts – Jacobs has speed, he has power and he has the natural ability to be aggressive. Those are the attributes needed to go head on against Golovkin.

If Jacobs is to adopt this game plan successfully, he has to:

Golovkin is the real pressure fighter out of the two, but rarely have we seen him under any sustained pressure himself, neither have we seen him really hurt; so it’ll be interesting to see if Jacobs can use calculated pressure to create openings and land hurtful punches.

Contrary to what some may think, GGG does have a good defense when he boxes carefully, though this defense is based around distance control rather than upper body movement.

This is the sole reason why Golovkin may not do so well if his back is forced onto the ropes and he’s not given a way out. Jacobs wild but powerful flurries may actually work to his advantage in this situation as Golovkin appears not to be fluid moving his upper body.

Again, this is a crazy tactic, but in actuality, the first three rounds are probably the best rounds to take out Golovkin – Jacobs can catch him cold and stop him in his tracks before Golovkin gets any momentum.

The above video shows some highlights of Jacobs’ speed, power and aggressiveness. He needs to pick his shots a bit better against GGG as he can get too wild and wreckless at times; this further refinement will increase his chances of success.

The longer the fight goes on, the more traction GGG begins to get; throughout every minute of every round, the Kazakh monster will undoubtedly be (or trying to be) putting on the pressure and breaking down his opponents.

To make it into the later rounds and be winning the fight, Jacobs needs to be clearly outboxing Golovkin consistently and/or have put him on the canvas a couple of times – both of which are mountainous tasks as Golovkin has shown the ability to be able to box and take a good punch.

If Jacobs is to be successful in knocking out GGG within the first 3-4 rounds, then he would need to implement the tactics outlined in the first method.

I don’t mean backpedaling and landing score blows off the back foot; NO, I mean throwing crisp and hard counterpunches with bad intentions. The Marquez KO of Pacquiao and the Martinez KO of Williams type counters; the fall flat on your face type counters.

This requires Jacobs to set his feet and shift his entire body into each punch which of course, puts him in a dangerous position too should he miss or gets hit first.

The vital question is, can Jacobs counter while effectively fighting off the back foot against such an efficient pressure fighter?

The last time Jacobs was forced to do that was against the fantastic Russian technician, Dmitry Pirog, who starched Jacobs inside 5 rounds.

Granted, Jacobs is a much more complete fighter now but did he learn anything from that fight?

None of us really know the answer to that because looking through his list of opponents since that disastrous knockout loss, the only fighter that really sticks out is “Kid Chocolate” Peter Quillin, who himself didn’t have any career defining victories.

On March 18th, we will find out how much Danny Jacobs has improved over the last few years, and if he belongs in the shortlist of elite fighters in boxing.