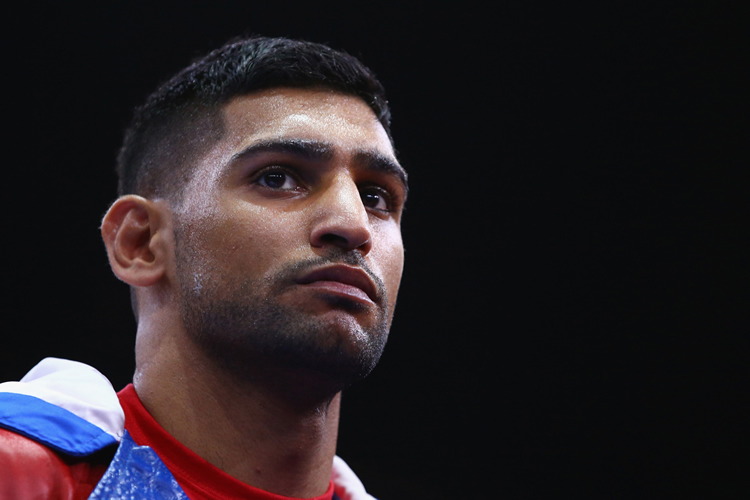 Amir Khan of Bolton, England was an Olympic silver medalist that has gone on to win multiple world titles. His speed, work rate and style has made him an exciting fighter to watch, but his lack of defense and seemingly fragile chin has made him vulnerable. Here are the greatest Amir Khan quotes.

1 “Both fighters just wanna get in there and get the fight on, but it’s like we’re on a leash. As soon as they let go of that leash in the ring, that’s when we go at it.”

2 “I always said to my friends I’m never gonna go New York, I don’t like it, it’s too busy for me but I ended up being engaged to a girl from New York.”

4 “I will knock Danny Garcia out. I will take the world titles home. I know Danny didn’t train as hard as me. I promise I will knock him out. That is the only way.”

5 “We just wanted the truth to get out there. As fighters come from England and we come to the big stage in America, if we’re not gonna get treated right and not treated fairly then there are fighters from the UK that are never going to come to America.” – On his controversial loss to Lamont Peterson

6 “Like many who feel exiled, it is a primal requirement to return to your roots. And this project has built that bridge for me.”

7 “If I didn’t open my mouth, I don’t think I would’ve got the rematch against Lamont Peterson.”

8 “In the end he got caught taking something he shouldn’t have been taking.” – On Lamont Peterson testing positive for PED’s

9 “I’m also happy that boxing’s cleaning up. The sport is getting cleaned up.”

10 “I think I’m as good as the Russians and the Cubans but I’ve got my feet on the ground. Now that I’ve got a medal it is a huge thing for somebody my age. The pressure is off now and I’ll be relaxed, calm and cool headed for the next fight.”

11 “Coming to his hometown is more motivation for me because I wanna win his fans over.”

13 “Everyone I box now is going to be after me, but that’s what I want, to be tested to the full.”

14 “I wasn’t really impressed by the fight. He was making a lot of mistakes. He was fighting a 40 year old man who should’ve really got him out in 4 or 5 rounds.”

15 “I don’t wanna look too far ahead because you’re only one punch away from getting hurt and if I lose my next fight then all my dreams are gone.”

16 “The fight with Manny Pacquiao will never happen because we train together and we’re friends.”

18 “We have to make sure that if another major earthquake comes, people are better prepared. That means building better and stronger homes and communities than they had before.”

19 “I will fight anyone and I think the world of boxing knows that I will step in the ring with any fighter in the world.”

20 “It’s definitely a relief not to get as much attention for this fight because it means I can just get on with it just like any other fight.”

21 “He’s made me from being a good fighter to one of the best fighters in the world.”

23 “Mentally I’m very strong and nothing gets to me.”

24 “I’ve got a gymnasium in England where I keep kids off the streets, give them discipline and keep them out of trouble with the police.”

25 “With boxing, kids start behaving in school so I think boxing is one of the toughest sports out there and one of the best sports to put someone on a straight path.”

26 “If you cheat yourself in boxing then you’re not gonna win.”

27 “A lot of people think it takes a man to fight on the streets but boxing teaches you to walk away from fights on the streets.”

28 “We want society to clean up. There’s a lot of gun crime knife crime out there nowadays. Put all them away, you don’t wanna get involved in all that stuff. Get into a gym and train hard and be focused.”

29 “I’m more known than Kell Brook here in America than he is in England.”

30 “I was just fighting back at times when I didn’t have to fight back.” – On his loss to Danny Garcia