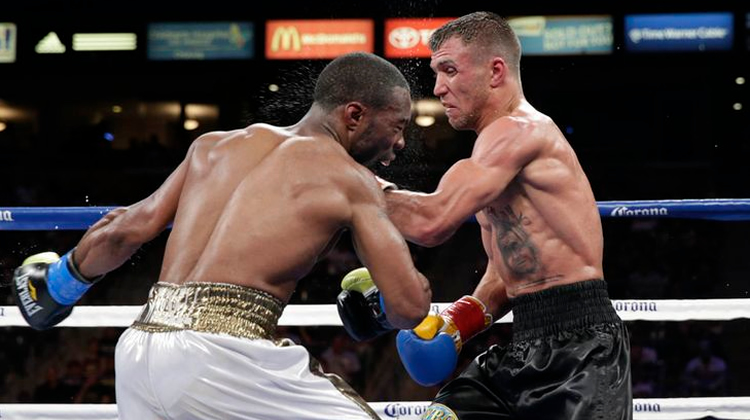 I’ll be the first to admit that I did not expect such a spectacular performance from Vasyl Lomachenko in his victory of Gary Russell Jr. I wrongfully picked against him mainly because of his lack of pro experience and quite frankly, I had only seen him in the Salido fight where he was underwhelming until the last couple rounds.

I am now on the Lomachenko bandwagon, as his amazing versatile boxing skills was on full display against a talented but outgunned and outsmarted GRJ. In part 1 of my boxing breakdown of Vasyl Lomachenko, I’ll be analyzing this fight specifically with plans for his other performances in the near future.

Here are several points I would like to make about the fight before I go into any of the technical aspects of Lomachenko’s game.

I saw so many dimensions to Lomachenko’s game in this fight. His overall athleticism is impressive, from his speed to his footwork to his workrate (even when he wasn’t throwing punches, he would be moving and feinting, albeit not too excessively). Here are some of his techniques that stood out the most.

It was wise of Lomachenko to utilize his jab to the fullest since his reach is slighter longer than GRJ’s. He mixed up feint jabs, fast jabs, set up jabs and power jabs to constantly keep GRJ confused and at bay.

When marching forward, Lomachenko would often touch with the jab several times before launching power punches (as seen above). The feint jab done two things – Help measure distance and force GRJ to make a move so that Loma could gauge his position to know when and where to attack.

As defensively sound as Loma was on the inside, his defense was just as effective at mid-range too. He had a great sense of distance, where GRJ had to really work hard to get within punching range, which was often just a few inches.

Many times, when Loma would get his punches off, GRJ would try to get him back, but Loma would take a step back or bounce out of range. This process was repeated throughout the fight, and it frustrated and tired GRJ out.

Time and time again, Lomachenko countered effectively with his right hook. If he had any more power in that right hook, GRJ would not have seen the 12th round.

Whenever Loma wanted to get off the right hook, he would bend his knees to get low, bring both his hands up into the peak-a-boo style and put his head knee GRJ’s chest, which made him react with by throwing a right hook, which Loma then countered with his own right hook.

Another instance where GRJ got caught with the counter right hook is when he would throw those pitty patt flurries which were flashy but had no power and highly inaccurate, which is why he was so easily caught.

This was a thing of beauty. Occasionally, when GRJ threw his jabs, Lomachenko would slip his head to his left and rapidly come over the top with a left cross. Sometimes, Loma would even bait GRJ into throwing his own jab by edging forward while touching with his jabs.

I recall during one of the rounds, Loma countered the jab with an overhand left which landed flush. I believe he could have also landed that whenever he wanted, but for some reason, he rarely ever threw the overhand.

Left and Right Hooks to the Body

Lomachenko’s body attack was calculated and at times, relentless. Within 40 seconds of the very first round, Loma landed a clean right hook to the body, which was a sign of things to come.

The left and right hooks to the body were consistent throughout, simply because GRJ kept his guard up high in fear of the shots upstairs, which left his body exposed.

The body attack would really get serious in the 5th and 7th rounds, immediately after Loma would land a clean counterpunch upstairs, which seemed to stun GRJ and made him cover up. Lomachenko mixed his body attacks well with left and right hooks to the head, and GRJ could never tell where the shots were going to come from.

If there’s one type of punch that Lomachenko didn’t utilize as much as he should’ve, it’s the uppercut, which GRJ was open for all night long. The moments where Loma did have success with his uppercuts was on the inside, where it was safest to throw short right uppercuts.

In the final round, with about 20 seconds left, Loma landed a short right uppercut which drove GRJ back onto his heels, and ended up in relentless assault by Loma to end the fight.

I’m excited about the prospective fights that lay ahead for Vasyl Lomachenko, who has already stated that he wishes to unify the division. The Featherweight division is stacked with talented champions including Nonito Donaire, Nicholas Walters, Evgeny Gradovich and Jhonny González. Even the division to the North and South has good names.

I think that Loma should get some more rounds in with a contender/former champion such as Wilfredo Vasquez Jr, Marvin Sonsona or Simpiwe Vetyeka before going after one of the other champs. Whoever he fights next, I’ll be keeping a watchful eye to plan part 2 of Vasyl Lomachenko’s boxing breakdown.