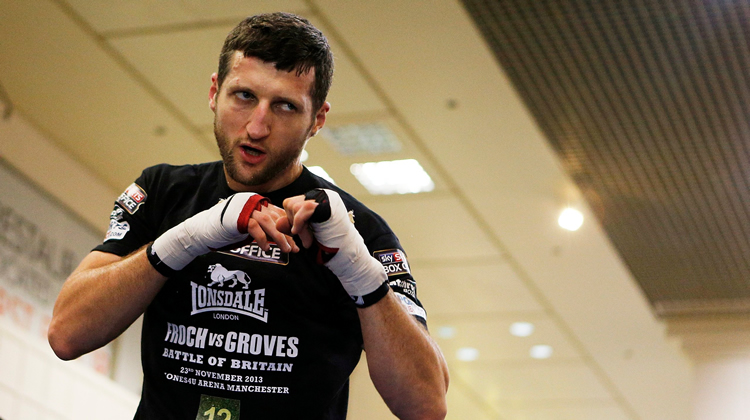 Having fought the toughest competition more consistently than anyone in boxing, Carl Froch of Nottingham Great Britain deserves nothing but respect. He’s tough and is seen as cocky at times, but doesn’t talk trash. Here are the greatest Carl Froch quotes.

1 “It’s counterproductive and self-destructive to bear grudges with people that are negative.”

2 “He was fortunate to fight me on a bad night because if he fights me when I’m firing on all cylinders, he’s getting battered as well.” – On his fight with Andre Ward

3 “My first fight was a little weasel from American called Andre Dirrell. I say that because he runs and holds, and I hope Abraham bangs him out.”

4 “He was WBC champion, I was mandatory. He had his opportunity to earn big money and defend against me, and he chose not to. It’s as simple as that. He did not want to fight ‘The Cobra’, cos he knew he was probably going to get one of these (his fists) on the chin and it was going to be all over.” – On Joe Calzaghe

5 “I’ve got no aspirations to become an A-list celebrity.”

6 “I was prepared to get knocked out myself trying to knock him out, because then I could sleep at night knowing that I’ve given my best.” – After his 12th round knockout over Jermain Taylor

7 “I haven’t had the recognition I deserve, You can go back to anybody’s career – Ricky Hatton, Joe Calzaghe, David Haye, Amir Khan, Chris Eubank, Nigel Benn, Steve Collins, Naseem Hamed. My record is better than all of theirs.”

8 “Bute coming over here is a big mistake.”

9 “Some people have a team of ten people – Waste of money, waste of time. I do it on my own when I’m in the ring.”

10 “It’s not Beirut or Bosnia.” – About his rough upbringing in Nottingham

11 “Your longevity in the sport is governed by how you live in between the fights.”

12 “He knows I’m brutal. He’s knows I can punch hard. He knows if I connect on his chin, at any one moment, 12 three minute rounds, he’s going to be in serious trouble. If he’s not on the floor, his legs will do a funny dance.” – On Andre Ward

14 “The referee jumped in too late in my opinion. He’s the champion and he’s got to be given every chance, but a lot of people was wincing and cringing seeing the finish cos his head is bouncing all over the place.” – Over his destruction of Lucian Bute

15 “I’ve got no interest in going over to California to fight that boring git, in a fight that no one’s interested in, and that’s the reason why he’s trying to pimp himself out everywhere.” – On a potential rematch with Andre Ward

16 “Somebody thinking that they can make noise to intimidate me is comical.”

18 “I don’t see the need for road rage or problems in pubs – “He’s harder than you and he can knock you out and I can beat you up.” Big deal. I get paid to box, I do something I enjoy and I love the sport and that’s where my fighting stays. I’ve got nothing to prove outside the ring.”

19 “I knew it was all or nothing.” – After beating Lucian Bute

22 “It is satisfying following such an emphatic victory over the current unbeaten champion (Lucian Bute) to know that there’s a lot of people eating humble pie.”

23 “You’ve got to be careful against classy fighters, especially counter-punchers because if you go for the finish too early, you can end up getting finished yourself.”

24 “He’s got a rematch clause in his contract but I’m not sure if he’s going to want to exercise that rematch but if he does, I’d happily oblige. I’ll go over to Canada and give him another whooping.” – On Lucian Bute

25 “Joe Calzaghe is next. If he gets himself out that armchair, gets himself back in the gym, let’s have a fight for the British fans and the rest of the world.”

26 “You don’t need to go all deep and meaningful and start talking about Daddies. It’s yes or no answer.” – Speaking to Andre Ward

28 “I don’t benefit by minimizing his accomplishments (Andre Ward).”