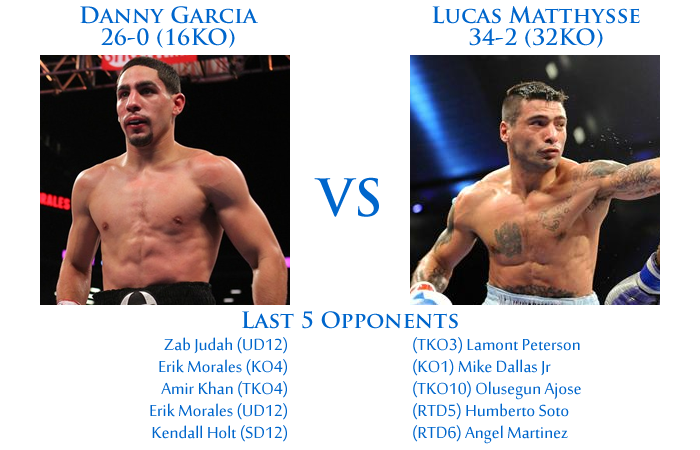 On the undercard of one of boxing’s biggest fights, Floyd Mayweather Jr VS Saul Canelo Alvarez, there will be one of the most highly anticipated fights in boxing in quite a while, Danny Garcia VS Lucas Matthysse.

I’m really looking forward to this fight, even more than the main event because we have two of the top junior-welterweights and undefeated punchers that can box and bang. This should be explosive from start to finish, and I believe there will be only one outcome…someone’s going down hard.

Here’s my analysis and prediction for Danny Garcia VS Lucas Matthysse.

“The Machine” is what the fans and media call Lucas Matthysse, and he lives up to his given nickname very well. He has explosive knockout power in both hands, but his ability to set-up, time and deliver his punches accurately is what’s so impressive. Not to mention that his body attack is punishing and relentless.

Danny Garcia doesn’t have quite the same offensive abilities as Matthysse. For one, his power just cannot be compared with Matthysse’s, though he hits hard in his own right, and two, his punches are wider and easier to avoid. However, Garcia is good at standing in range and throwing same-time counterpunches, where I see him being most dangerous.

There are more dimensions to Matthysse’s defense than first meets the eye. There are many subtle things that he does that throws off his opponent’s rhythm and focus. Matthysse likes to keep an open handed high-guard when standing in range, and he parries a lot of jabs and catches a lot of punches on the side of his gloves.

Also, Matthysse sometimes takes little steps back to make his opponent reach and miss with their punches, and then follows with a counter.

Although he’s not a pressure fighter, Garcia gets tagged more than Matthysse because he likes to stand flat-footed in the pocket for too long without much head movement. We’ve seen him vulnerable to the overhand right in his first battle with Erik Morales, and the straight left down the middle in the Zab Judah fight. It will spell very bad news for Garcia if he doesn’t sharpen up his defense for Matthysse.

Both Matthysse and Garcia do not have the greatest footwork in the boxing, but they don’t have the worst either. They both have good and bad qualities to their footwork.

Matthysse often swings for the fences and falls off balance when he misses. This is because his feet are sometimes too in-line with each other and not wide apart enough to have a stable balance. Matthysse makes up for this flaw with his superb ability to cut off the ring.

Although Garcia is more flat-footed than Matthysse, he usually stays on balance with good foot positioning which allows him to fully commit by turning his entire body when throwing his infamous left hook. The problem with Garcia’s footwork is that he doesn’t use his feet enough, but opts to remain stationary, which will allow Matthysse to find the target much easier.

Both fighters appear to have more or less equal hand speed. Matthysse can throw his lead hook more short and compact compared to Garcia, who throws it wide. The speed of straight punches I would give the edge to Garcia while combination punching fluidity also goes to Garcia, although it’s close.

The disparity in punching power between both fighters is apparent. Danny Garcia has hammers, while Lucas Matthysse has sledgehammers for both fists. 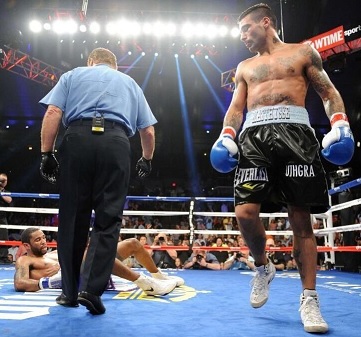 It’s been said that Matthysse has knocked down every single one of his opponents, I know this not to be true since he didn’t knock down Vivian Harris, but regardless of this, he has still managed to hurt all his opponents, and they often remain hurt.

I feel that Garcia’s power is somewhat overrated, and the hype on this newfound power has been stemmed from his knockout wins over Amir Khan and Erik Morales.

Without a doubt, Garcia does hit hard, but that’s more of a case of who he’s fought and the great timing of his counter-left hook, his money punch, while Matthysse’s punches seem to have an effect regardless of where it lands and whether they see the punch coming or not.

He was once considered a slow starter, but after disputed split decision losses to home town favorites Zab Judah and Devon Alexander, Matthysse has now appeared to up the pace of his workrate, which only seems to get better the longer the fight goes.

Garcia usually maintains a steady pace throughout the majority of the fight, but seems to fade slightly in the championship rounds, as seen in his first fight with Erik Morales and Zab Judah.

The constant pressure from Matthysse is mentally and physically imposing, and Garcia needs to find a way to keep Matthysse at bay and think twice before getting inside, otherwise it’ll be a long night for Garcia, if not a short one.

There’s a perception that pressure fighters with knockout power has less ring intelligence than pure boxer/puncher type fighters. While this may be true in most cases, it’s not in this fight.

It’s not that Garcia cannot do these things, but he’s not as effective as Matthysse. Garcia does have same-time counterpunching ability and will throw punches to draw the lead from his opponents, but he often looks very ordinary and is not as versatile as Matthysse.

Based on his impressive string of recent performances, Matthysse opens as the favorite to win, and rightfully so. I believe Matthysse will do to Garcia what he’s done to most of his other opponents, seek and destroy.

Why I think Matthysse wins:

In order to have a chance at winning this fight, Danny Garcia will need to control range and box off the backfoot (both of which he doesn’t usually do) while getting Matthysse’s respect.

In Garcia’s past fights, there has been nothing to suggest that he’s capable of out-boxing a hard-hitting pressure fighter for 12 rounds, let alone one as good as Lucas Matthysse. I can only see one outcome.