How to Get Bigger and Stronger Calves

Having strong calf muscles as a solid foundation will provide you with more strength and explosiveness in actions such as sprinting, jumping and throwing punches. In this article, you will learn how to get bigger and stronger calves as explained by fitness and bodybuilding expert Lee Hayward.

Before we get into the specific exercises you must do in order to increase the size and strength of your calf muscles, you must firstly take these considerations into account.

Let’s take an example of two boxers – Manny Pacquiao and Oscar De La Hoya. Both are or were considered big punchers. Pacquiao has huge calf muscles but this is mainly because of genetics, and partly because in his youth, he had to carry buckets of water up and down a hill for his family.

De La Hoya on the other hand, has very thin calves despite having good punching power. Though he didn’t adopt the same active bouncing style inside the ring as Pacquiao, he was still an Olympic Gold Medallist as an amateur and had good foot movement.

The point is the size of your calf muscles is really a non-factor when it comes to sports performance. There are literally thousands of examples from elite sprinters, basketball players and boxers.

“You’re going to get a complete calf workout and we’re going to take a unique spin on calf training to help spur on some new muscle growth. Now in most commercial gyms that you train at, you have very limited calf equipment. You usually have a seated calf raise and a standing calf raise. That’s pretty standard in most gyms…but there’s an little twist that works really well and makes these exercises totally different for stimulating growth in your calves.” 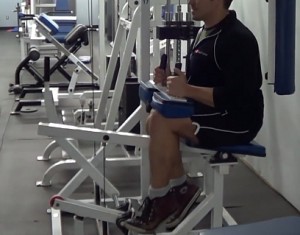 “So I’m going to start with the seated calf raise and all I’m going to do is simply do one leg at a time. If I do each leg independently, it’s going to work the muscles totally different. You’re going to feel a unique burn because of the way it’s angled and this will allow you to balance out both calves to get equal development in the left and the right side.”

“I’m using a very light weight here. You don’t need a lot of weight when you’re doing a single leg. Even less than if you were doing two legs at the same time just because of the angle and position, it’s going to cut the weight by more than half. Use a really straight form, slow and controlled. Hold that peak contraction.” 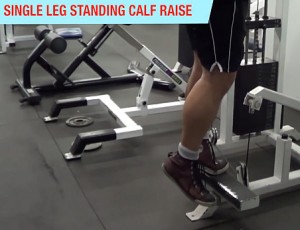 “Moving onto the standing calf and we’re going to work on each side independently so you don’t need to rest between sets because while you’re doing one leg, the other leg is getting a rest. So you can keep the pace very fast.”

“Now you’ll notice with the single leg calf raise I’m not using a lot of weight. In fact, I just have a couple plates here on the weight stack and that is more than enough. With this exercise, it more than cuts the weight in half. So to give you some examples…”

“If you’re used to doing standing calf raises with 200lbs , it doesn’t mean that as soon as you go to single leg you’re just going to cut the weight in half and use 100lbs. Chances are you’re going to have to go a lot lighter than that. The fact that you’re using one leg at a time is going to throw the bodyweight and the angle that you’re working your calves just totally different than when you’re doing them balanced on two feet. Even start off by using the weight of the machine until you get used to this exercise and progress gradually.” 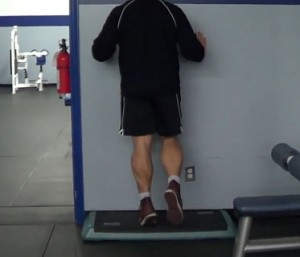 Using the exact same technique as you would for the standing single calf raises on the machine, apply it to the bodyweight calf raises but on the exercise step box instead.

Another way to get bigger and stronger calves is to walk or run up and down steep hills or a long flight of stairs/steps. This is great for entire leg strength and endurance as well as fat loss.