The Hardest Punchers George Foreman Has Ever Fought 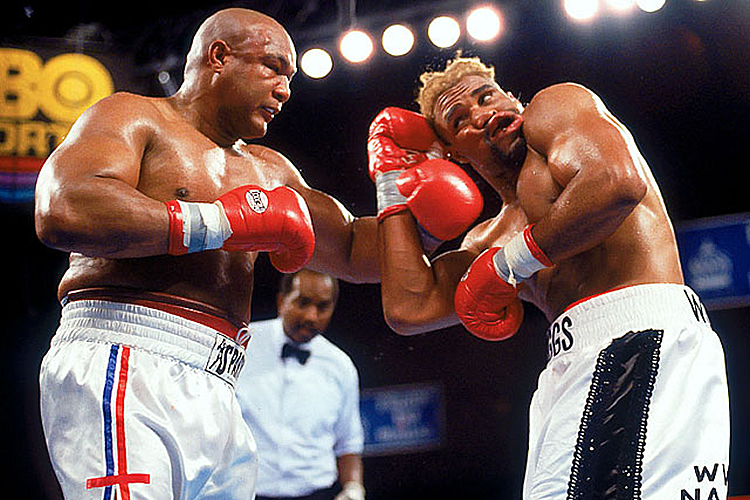 When a renowned puncher like George Foreman tells you someone punches hard, you better believe it.

He’s had 81 fights (76 wins), and of those, 68 of them were by knockout. That’s a knockout percentage of 84%. Granted, he’s fought some abysmal opponents that should’ve never stepped in the same vicinity as Big George, but the world already knows he’s fought great fighters and all time greats.

After Foreman’s fight with Gerry Cooney 1990, Foreman appeared on David Letterman and talked about the hardest punchers he’s ever been in the ring with.

It may or may not surprise you that he chose Gerry Cooney, Ron Lyle and Cleverland Williams.

Foreman said of those fighters:

“They hit so hard that it vibrates your body even if you block it; it just goes right through you”

Each one of those fighters possessed good punching power, but they don’t present the same punchers aura as other fighters Foreman has fought (before this interview took place), such as Bert Cooper, Joe Frazier and George Chuvalo.

It may be because punching power is largely based around timing, speed and accuracy. Perhaps Cooney, Lyle and Williams’ punches connected much better than everyone else on Foreman’s resume.

I wonder if Mike Tyson would’ve been on Foreman’s list of hardest punchers had they actually fought.

Speaking of Mike Tyson, Foreman stated the only reason for his comeback was to fight “The Baddest Man on the Planet”, who held a World Heavyweight Title at the time.

And what did Foreman make of his chances against Tyson?

“I will assure you I would do it in the same fashion. 1 or 2 rounds. I guarantee you.”

It isn’t cockiness or arrogance either. When you have a track record like George Foreman, you can say these kind of things and make it believable.

In an era where fighters are either too politically correct or completely arrogant without being able to back it up, hearing Foreman say this with convinction wants part of me to teleport back to the “golden age” of heavyweight boxing.

What do you think about George Foreman’s comments on the hardest punchers he’s ever stepped in the ring with?

How do you think George Foreman VS Mike Tyson would have played out?

Bear in mind that Foreman was in the latter stages of his career when he made those comments, and Tyson had already been defeated by Buster Douglas (or was about to).

Let me know what you think in the comments section below.