How to Block a Punch

When your opponent unleashes a punch, sometimes it’s difficult to get away so you have to resort to blocking it. When you block a punch, you can get a feel of how hard your opponent punches and whether he drops his guard when throwing.

However, it’s not always as easy as it seems to block, especially when there’s a barrage of punches. Learn how to block a punch properly to ensure that you minimize the risks associated with blocking punches.

If you want to learn step-by-step the boxing fundamentals, I would recommend you to check out the How to Box in 10 Days course, which has helped thousands of fighters and non-fighters online.

The Fundamentals of Blocking a Punch 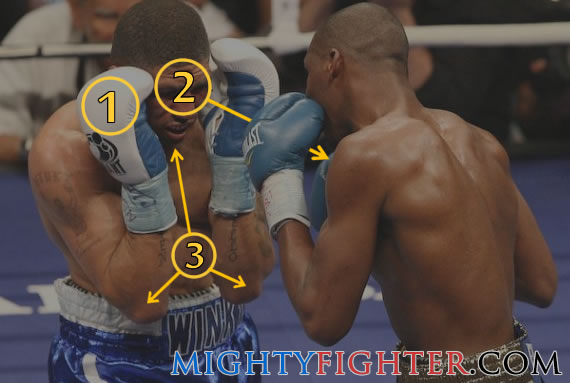 How to Block Punches

Please note: The following points are made assuming that you and your opponent are both the same stance.

The clip on the right shows James Toney blocking the lead hook to the body and head, then quickly counters with a short rear hook, though he could just have easily thrown the lead hook also.

Blocking Hooks to the Body
This is the exact same method as blocking hooks upstairs, but you must lean slightly to the side that the punch is coming from to catch the punches with your elbows. You don’t lower your arms because your opponent may follow up with a hook upstairs.

To block either the rear or lead uppercut, follow the exact same method for blocking hooks. You’ll find that as you rotate your hips, the uppercut will be deflected and will just graze past your arm.

Be careful not to bend at the waist and lean forward otherwise you may just end up meeting an uppercut head-on.

Blocking the Cross to the Head
The cross comes from the opponent’s rear hand, so you must block it as though it were a rear hook or overhand, and you must rotate your body a bit further since the cross comes in a straight line and not from the side.

You’ll find that as you do this, the punch will deflect itself from your glove and you can counter with a cross of your own or a rear hook, uppercut or overhand (depending on how your opponent is positioned).

On the clip to the right, you see Miguel Acosta blocking and rolling the lead left hook, then he rolls and blocks the right cross, which leaves him in position to counter with a combination.

Blocking the Cross to the Body
Your opponent will throw the cross usually to the solar plexus (center area just above the belly button) from mid-range. This means that you can use your both your elbows to catch the punch by closing them inwards slightly.

At the same time, you should be bending at the knees and waist slightly (so your back is hunched over like a turtle’s shell) to reduce the impact.

Blocking punches is necessary for inside fighting and very useful at mid-range, but by no means should you resort to blocking as your only form of defense.

If someone has fast hands and fights on the outside, then it’ll be difficult to block and counter because as soon as you block a punch, they may already be gone.

Get a partner to throw synchronized punches to your body and head while you practice blocking them. Your partner can use mitts as well as boxing gloves, if you want to block and counter, as well as mixing it up.

It’ll be tough constantly blocking against a powerful puncher because your arms will eventually get tired. Instead, you must block, bob and weave, parry and slip punches in order to become a defensive wizard.