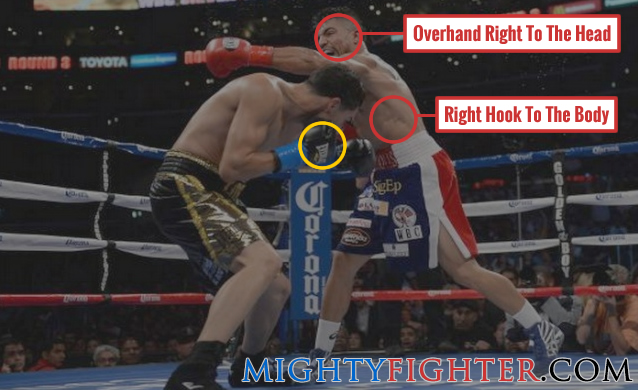 The greatest fighters in boxing know how to counterpunch, quickly turning their defense into offense. A counterpunch is a punch that is thrown immediately after your opponent is made to miss his own punch. To become a masterful counterpuncher requires excellent timing, accuracy, patience, and ring intelligence.

Why Learn How to Counterpunch?

The pull counter requires you to make your opponent miss his punch by pulling your head back slightly then coming back with a straight punch. You must bear in mind that:

This is similar to the pull counter in some aspects, but you must dip your head to the outside of your opponent’s jab, and then follow up with a straight punch.

It’s possible to slip to the inside and come back with the hook, but you leave yourself much more open.

Not only that, but you’ll end up wasting the punch if your opponent has his guard up, as opposed to slipping on the outside where your opponent will be open and cannot reach you with his other hand. You can read more about slipping punches here.

To pull off the block counter, you must keep a high guard, catch your opponent’s punch on your glove (or elbow if it’s a body shot) and then immediately shoot the hook with the same hand that you caught the punch on.

Make sure that you roll with the punch to reduce the impact. The block counter is used at mid-range and on the inside as it’s usually used to counter off your opponent’s overhand or hook. You can read more about blocking punches here.

The roll counter is the same as the block counter but doesn’t require a high guard. Instead of catching your opponent’s punch with your glove, you roll with the punch instead while throwing an overhand or hook at the same time.

This is a risky counterpunch because it means that you have to get hit in order to set up the punch. Of course, the impact of your opponent’s punch is greatly reduced due to the roll, but if you time it wrong then you could be in serious trouble. You can read more about rolling punches here.

There are many ways in which you can counterpunch by utilizing the shoulder roll technique. It does however require good reflexes and timing.

The most common counterpunch for the shoulder roll is to roll your opponent’s right hand (if you’re both orthodox) and come back with either the straight right or right uppercut, whichever is more convenient.

If you want to attempt this, make sure that you actually know how to do the shoulder roll properly before trying to counter off it.

Some people won’t categorize this as a counterpunch, but I’ve included it anyway because it’s extremely close to being one. When you sense that your opponent is about to throw a punch, as soon as he throws it, you time it and throw your punch exactly at the same time.

This requires almost perfect timing but very effective and one of the safest ways to land a punch, as long as you follow these rules:

Setting up a Counterpunch

Counterpunching requires your opponent to initiate an attack first. It can be difficult to predict a boxer who is intelligent, fast and a counterpuncher himself. This is where the feints come into play.

This is a move that’s designed to get your opponent to think that you’re going perform a certain action, causing him to make a move.

Essentially, this allows you to predict when and how your opponent is going to attack. Some useful tips to using feints to set up a counterpunch:

Learning how to counterpunch is not easy. Thinking is necessary, and that uses up energy also. But if you’re great at counterpunching, you can effectively control the fight.

Always start off by getting a partner to act as your opponent to rehearse the counterpunches before trying it in sparring or a real fight.

If you’re relatively inexperienced at counterpunching, don’t try anything too fancy. Go for the safer options which is the block counter and the duck counter. Get good at those until you’re better at defensive and offensive timing.

As you can probably tell by the length of this article, counterpunching can be complex, but the rewards are great. Just like with anything in boxing, make sure you get the fundamentals down correctly first and foremost.

If you want to learn more about counterpunching and other technical boxing techniques, then I recommend the Advanced Boxing Workshop course.