How to Fight and Expose the Boxing Bully 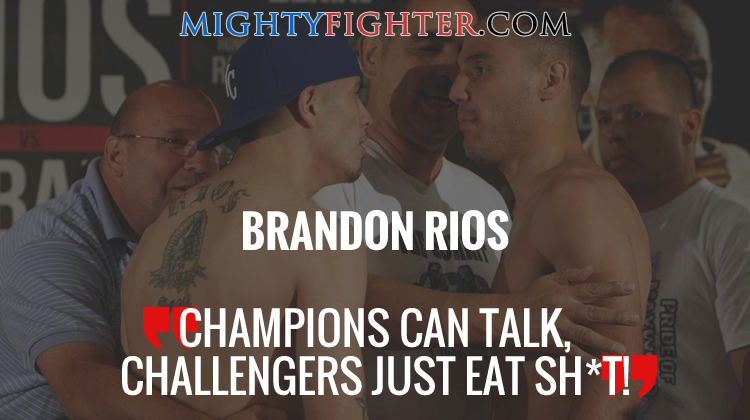 Some fighters get great joy from pushing the envelope before a fight in hopes that it’ll take you off your game. You must not allow that to happen. You’ll find out how other fighters have overcome the mental and physical intimidation imposed by the boxing bully.

We’ve seen it time and time again where one fighter (or his camp) gets under the skin of another fighter and it shows when fight night arrives. The fighter on the receiving end of the tirade performs badly and either loses the fight or has a much tougher time than expected.

Some examples of this are:

Amir Khan VS Danny Garcia and his Dad – Danny’s father Angel Garcia went on a rant about Khan’s suspect chin, predictable style and Pakistani origin. When the first bell rung, Khan went on the attack round after round until the fourth round when a perfectly timed counter left hook turned Khan’s world upside down.

Carl Froch VS George Groves I – During the entire build up to their first encounter in the ring, Groves taunted and attacked Froch’s supposed insecurities and weaknesses.

Despite Froch winning the fight via a controversial stoppage, Grove’s verbal onslaught appeared to have affected Froch as he was knocked down badly in the first round and hurt several times throughout the fight.

Some fighters are blessed with the gift of the gab and use it to their advantage. Regardless of whether it’s a front or not, the more your opponent’s verbal outbreak affects you pre-fight, the likelier you will be affected during the fight.

So how do you not get affected by such antics?

There are two types of fighters that are prone to respond in a certain way that may be detrimental to mind state or fighting style, and they are fighters with an immense amount of pride and fighters who have many insecurities, or even both.

If either traits apply to you, then there are a few things you can do to achieve mental victory.

If you manage to avoid being affected by these mental alteractions then you’ve already won half the battle. Having the discipline and mental strength to overcome whatever your opponent throws at you are the signs of a focused fighter.

After all the talking is done, what matters the most is how you handle the fight…

A bully outside the ring is sometimes a bully inside it too, though not always. Maybe your opponent is a respectable person. Perhaps he’s even the type of person that you would invite over for dinner.

You know none of this matters until after the fight because you’ve seen him fight before and his style is one of all-out aggression, using his physical strength and power punches to intimidate and overwhelm his victims.

This fighting style is often linked with the term ‘bullying’.

It can be likened to fighters such as George Foreman, Mike Tyson, Arthur Abraham, Ricardo Mayoga, Antonio Margarito and Brandon Rios just to name a few.

One thing they all have in common is that they all fell to boxers who they couldn’t impose themselves on. Here are some methods on how to stop the aggressive onslaught from a boxing bully.

It’s often the case that a pressure fighter doesn’t like being pushed back since they’re so used to coming forward. You can push them back in clinches or force them to fight going backwards by imposing your will on them. This means that you need to utilize effective counterpunching and defensive skills.

When the bully gets pushed back enough they will begin showing signs of weaknesses. Fatigue, fustration, discourgement or all three will set in. That’s when it’s time to up the ante.

Fight When You Want to Fight

The bully wants to impose his will on you and smells blood when you start to tire. You must not allow him to fight when he wants to fight. The idea is to quickly get your punches off and then either move or clinch effectively (not excessively) as soon as he wants to retailiate.

If you have the focus and skillset to do this repeatedly, then you’ll end up landing a lot more punches than your opponent.

If you allow the boxing bully to keep on throwing punches while you spend the majority of time defending, he’ll just end up overwhelming you.

This is where you need to throw hard and accurate counterpunches in between his punches or when he misses. Also, throwing combinations with speed and power like Manny Pacquiao did against Antonio Margarito.

If You’re a Light Puncher…

It’ll be even more difficult for you to overcome a highly aggressive and hard hitting bully in the ring…but not impossible.

You’ll have great success by employing tactics above but physical strength and an excellent engine are required for the task at hand.

Even light punches will begin to sting after being hit so many times by them and cuts and swelling may even begin to appear. You’ll be surprised at how many bullies in boxing will fold when they cannot impose their will.