How to Fight Using 10 Veteran Tactics 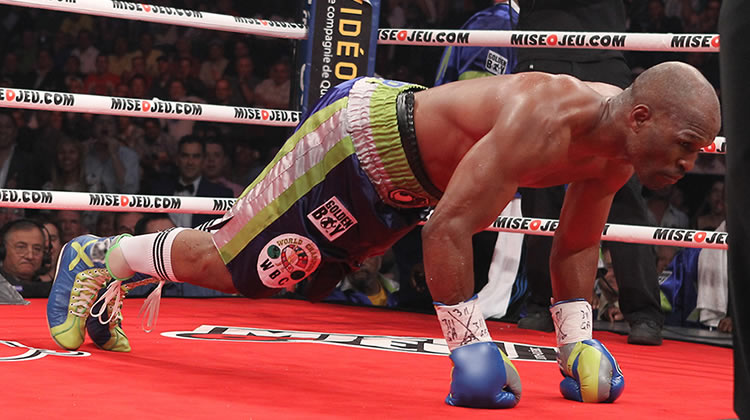 Your longevity in boxing all depends on how well you can box, but sometimes, you may be forced into a situation where you have no choice but to try and outfight your opponent.

There are certain tips and tricks you can use to make life in the ring uncomfortable for your opponent. These are the tactics that the boxing veterans know so well, which you can learn.

It’s very physical and sometimes psychological. It isn’t pretty, but it’s effective. Learn how to fight by implementing the following tactics.

If you want to learn more advanced boxing techniques, I would like to recommend the Advanced Boxing Workshop, which shows you how you can improve your footwork, balance and punching power.

Touching gloves is a sign of respect to each other. If you mean serious business in the ring, which you should, then the only times you should touch gloves with your opponent is before the first bell and after the last bell.

Anything in between is strictly fighting and you have to let your opponent know that. If he tries to touch gloves with you after every round, ignore it no matter much of a nice person you are.

It may not mean much, but if your opponent is mentally or emotionally weak, then these kind of actions may affect his performance and take him off his game plane.

In the above video, Gennady Golovkin demonstrates how to use head movement and leverage to push his opponent back and gain control.

Whenever you’re in close and you cannot punch or you want a slight pause in the action, then you can tie up your opponent’s arms and push him back at the same time.

When pushing, always keep one foot in front of the other and lean forward with your head on his chest or shoulder to get more strength.

Try to push him all the way back onto the ropes or into the corner where you can then punch away when he’s squared up on the ropes.

Doing this weakens your opponent’s legs as he’s forced to support extra weight and he may even try to push back. If he does, then just turn to the side so you don’t have to support any added weight. In any case, he has to use up more energy than yourself.

In order to out-muscle your opponent, you need strong legs and a strong core.

3) Trap Them in the Ropes or Corner

When you’re able to push your opponent back onto the ropes or in the corner, keep him there for as long as possible by not giving him enough space to get out or cutting off the exit routes. Many fighters feel uncomfortable in that position so the longer he’s there, the more you’ll take him off his rhythm.

If you’re fighting a shorter opponent, when you have your opponent trapped, whatever you do, don’t bring head down to his level by bending at the waist or falling short.

Always gauge your distance and when you’ve trapped your opponent and you happen to be on the inside where the shorter guy can reach you easier, then you must either smother his work, or lean on him with your body weight (very much like what the Klitschkos do) so he cannot punch.

To smother someone so he cannot punch is an effective way to dampen down aggression and reduce the power behind his punches. This works best when your opponent is on the ropes or in the corner.

It’s a great tactic for any type of fighter but more so for shorter against taller fighters or if your opponent has much quicker hands than you.

You have to be able to throw short punches and know how to hold one arm while banging away with the other. Pick the right moments to create a bit of space to immediately throw a hard punch then smother again.

It’s a very frustrating position to be in when you’re being constantly smothered and hit without being able to let off any punches yourself.

There’s two ways of holding and hitting. The first being when you tie up on of your opponent’s arms and hit him using your free hand.

Keep your punches short and make good use of uppercuts and hooks inside. There won’t be a lot of power behind the punches but they will have an accumulative effect and helps to discourage your opponent.

The second being when your opponent ties up one of your arms and you hit him with your free hand. If he ties you up around your waist, then that’s even better as you punch with both arms. No matter how you’re tied up, if you have a free hand, then use it.

I recommend that you watch Andre Ward vs Allan Green (highlights seen in video above) / Carl Froch  and Robert Guerrero vs Andre Berto to see a great example of how to effectively and legally hold and hit.

6) Put on the Pressure

It’s possible to put on pressure without taking much punishment, but you have to be very smart and methodical with your approach. With the defensive and offensive techniques in this article, you can implement a strategy where your opponent is physically grinded down.

When he wants to rest, don’t let him. Keep punching, pushing and smothering his work. He will eventually begin to tire out. The whole aim is to make your opponent believe and feel that he has no chance left to comeback.

There will be indications that he’s beginning to crumble. You can see it in his body language. He may begin complaining to the referee about certain things or he may give a look of resignation. This is the ideal time to crank it up a notch and take him out.

Whether your plan is to fight in close quarters or to fight mid-range, you must go to the body to break your opponent down. Head hunting is too predictable and those punches can easily be avoided.

You should start going to the body as early as possible in the fight. They will help you to set up head shots. At times when you have one arm tied up or you’re in a position where you cannot reach your opponent’s head (e.g. If he’s bending low at the waist with his head under your arm) you can dig into the ribs.

The above video shows how Adrien Broner distracted his opponent by throwing multiple light punches before landing a big one.

You won’t win a fight or even make your opponent think that he’s in a fight by only throwing single punches. When you’re on the inside, mix in short and quick combinations and then move or smother him.

By doing this, you’re getting off your punches and not allowing your opponent to do the same. Also, by keeping your punches short when you’re pressed up on him, it’ll be very difficult to counter.

9) Stay on the Inside

In the case that you’re experienced enough and have learned the above tactics, then you’d want to keep the fight on the inside for as long as possible. While it makes for a boring fight for many viewers when you’re constantly holding, hitting and smothering, it’s highly effective and helps you to win fights.

This is a completely different way on inside fighting compared to just squaring up and throwing punches (like the Mexican slugger style). Instead, it’s a more technical method of inside fighting suited for those without big punching power.

It’s said that 90% of boxing is mental and 10% physical. While those figures are up to debate, there’s no doubt that the majority of boxing is to do with the mind. With this in mind, it’s a good idea to find ways to offset your opponent’s mind set in the ring, and I’m not referring to trash talk (unless that’s your style).

I’m referring to certain things you can do in the ring to possibly alter the way your opponent is thinking. Things such as a smile, shaking of the head or raising your hand after each round. Not only does it play in the mind of your opponent, but it affects the crowd and judges too. Of course, you better be able to back it all up.

If your opponent is not that mentally strong, then he can be frustrated easier and broken down quicker (seen in fights such as Floyd Mayweather vs Victor Ortiz or Timothy Bradley vs Devon Alexander).

In boxing terms, learning how to fight doesn’t always mean going toe to toe and slugging it out. As a matter of fact, you don’t even have to dish out huge amounts of punishment to wear down your opponent.

Just by implementing these tactics during a fight, you can beat most fighters, even if they’re physically stronger or hit harder than you. Andre Ward, Bernard Hopkins and Timothy Bradley are excellent examples of fighters who can rough up and discourage their opponents.

Simply by taking them out of their rhythm, messing up their game plan and making it extremely uncomfortable for them in the ring is enough to drain many fighters physically and mentally.