How to Parry a Punch

To parry a punch means to deflect it away into another direction. It’s more effective than blocking as you use your opponent’s momentum against himself.

When you learn how to parry a punch, you can create openings for counters by using little energy. Some other benefits of parrying punches are:

If you want to learn more boxing fundamentals, I highly recommend the How To Box In 10 Days course, which shows you step-by-step all the boxing basics for offense and defense.

Please note: The following points are made assuming that you and your opponent are both the same stance.

The down parry is used for parrying jabs and crosses. It’s a very light downward tap to your opponent’s hand and you’ll find that when your opponent is parried this way, the motion of his body will send him leaning in, which leaves him off-balance and open for a counterpunch.

Parrying the Jab With the Down Parry
To parry a jab with the down parry, you must use your rear hand. Your lead hand should be guarding your chin.

As you parry the jab downwards, you can quickly counter with either a cross (like clip on the right) or a jab or your own.

Parrying the Cross With the Down Parry
It’s a lot more difficult to time the cross but if you want to use the down parry, use your lead hand. Again, make sure that your rear hand is guarding your chin just in case your opponent throws the lead hook.

Since the cross is a power punch, you may want to take a small step back or lean back slightly as you’re parrying. He will fall in and you can then counter with the cross, lead hook or a jab.

The side parry is very similar to the down parry but instead of parrying downwards, you have to push your opponent’s hand to the side. Doing to successfully will leave your opponent in an a position where he cannot follow up with another punch. This is a great opportunity to counterpunch, especially to the body.

Parrying the Jab With the Side Parry 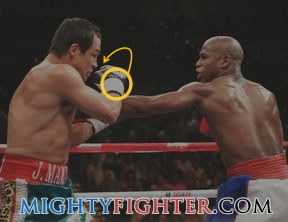 Using your rear hand, parry your opponent’s jab to the outside of your lead foot. So if you’re an orthodox fighting an orthodox, you would need to parry his jab to your left.

This will leave the lead side of your opponent’s body completely open so you can throw a rear hook to his body. You can also throw the cross or jab to his head, and your lead hook / uppercut will be effective since he’ll be falling into the direction of that punch.

This time, it will leave the rear side of your opponent’s body exposed, so you can throw your lead hook to his body or head. You can also throw a quick one-two (jab and cross) or throw them independently.

The loop parry is used to parry straight punches to your body. In a looping type motion, you use your hand to push your opponent’s punch to the side, away from your body.

Parrying the Jab to the Body With the Loop Parry 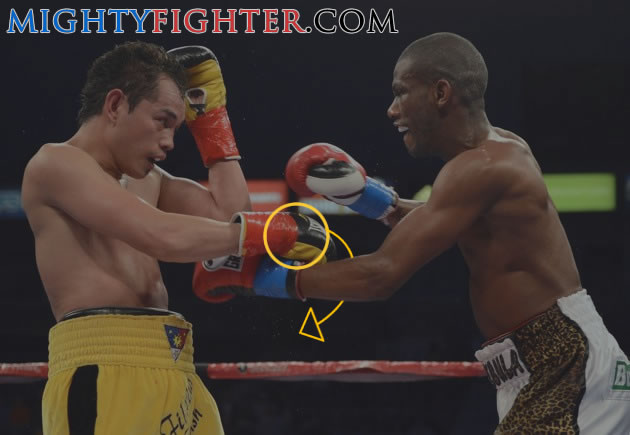 When your opponent throws a jab to your body, use the palm of your rear hand to push his jab away from your body.

So if you’re both orthodox, you would push his jab to your right side which leaves him open for a counter-jab or if you’re quick enough, you can land a lead uppercut.

You must be careful because even though you’ve parried the jab away, your opponent will still have his rear hand free to fire a cross or overhand.

Parrying the Cross to The Body With the Loop Parry
Use the palm of your lead hand to push your opponent’s jab away to your left (if you’re both orthodox). You can then counter with the cross.

To parry a punch you need good reflexes and knowledge of the right method as explained above. It’s common for beginners to get confused about which hand to use, which is why practice and good habits is the key to success. The best way to begin practicing is:

It’s also a good idea to practice combining parries with slipping punches and bobbing and weaving. If you want to be great at parrying, make it a consistent routine so that you instil the habit.