How to Throw a Body Shot 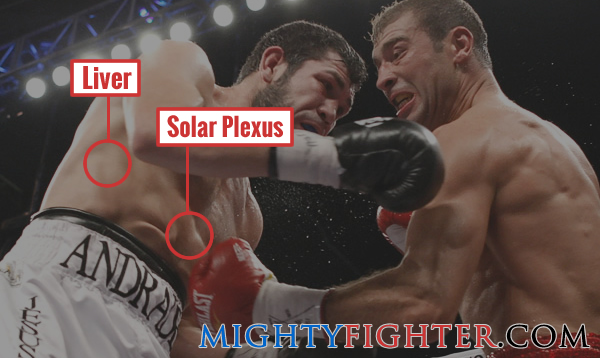 No boxer is ever a complete fighter without knowing how to implement body shots into his game. A consistent and effective body attack will eventually pay off in a fight, and it’s something that many fighters forget or didn’t bother to learn in the first place.

If you want to become a much better fighter, you must learn when and how to throw a body shot.

“Kill the body and the head will die.” – Joe Frazier

The body shot with the lead hook is perhaps the most common out of all, because it’s simple to set up and the quickest route to your opponent’s body. It’s a similar motion to the lead hook to the head.

This is the best body shot to use on boxers who like to move a lot. It’s quick to reach your opponent from the outside and mid-range, and should be aimed at the solar plexus region.

Make sure that you bend your knees and lower your hand slightly as you’re throwing the straight to the body. If you’re unsure about how to throw a straight punch (cross), check out my article on How To Throw A Cross.

If you’re looking to counterpunch with a body shot, then the rear uppercut is probably the most effective. It’s aimed to dig upwards towards the solar plexus or liver region, and you can muster up a lot of power with the rear uppercut.

Ensure that you’re either on the inside when throwing it, and if you’re mid-range, then you must either set it up with the jab or lead hook, or you counter under your opponent’s punch (usually the jab or cross).

Remember to pivot your rear foot as you’re throwing the uppercut if you’re looking for more power.

Setting up a Body Shot

This is one of the best ways to set up a lead hook to the body. Throw the straight right down the middle which serves as a distraction and obscures your opponent’s vision momentarily. You should then be in the perfect position to throw the body shot.

This is one of my favorite combinations that Micky Ward and James Toney often use to do.

The jab is the perfect weapon to set up any of the three above body shots. If you haven’t already noticed, all three are thrown with the rear hand, which means that they have to travel further to reach the target.

The jab is quick and can be used as a feint to distract or a measuring stick to gauge distance. To find out more about how to use jabs to set up punches, check out the article How To Throw A Jab.

It’s often harder to get up, let alone recover from a body shot than a head shot. Remember, heavy bags allow you to practice powerful body shots, so it’s recommended that you get one if possible (here are 10 of the best heavy bags).

Whether or not you’re a pressure fighter (which is essential), you must learn to implement a variety of body shots into your game and you’ll become a much better boxer because of it.