How to Throw a Cross

The cross, which is more commonly known as the straight, is a punch thrown with your rear hand directly at your opponent in a straight line.

It’s the second most used punch after the jab, and is the best punch to use within mid-range to long-range. You should work extensively on your cross because:

If you want to learn more boxing fundamentals, I recommend the How to Box in 10 Days course, which takes you step-by-step through the boxing basics.

The Fundamentals of a Cross 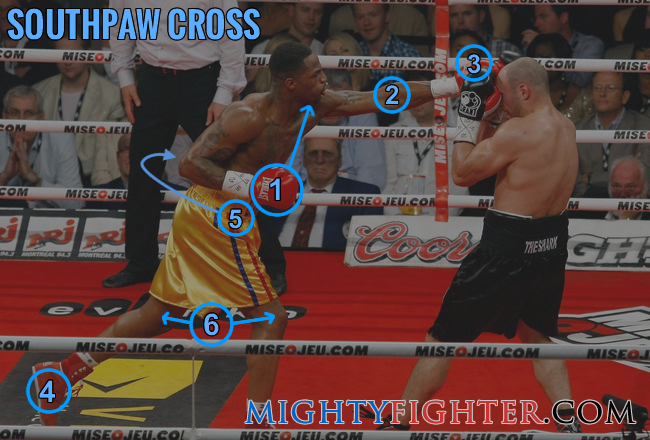 You can practice your cross with power on the heavy bag. Here are 10 of the best rated heavy bags here.

Setting up the Cross

The good thing about the cross is that it can thrown independently very easily and safely, but it can also be set up from a variety of punches. The following combinations flow nicely ending with the cross.

This is perhaps the most widely used combination in boxing, and for good reason. They’re both straight punches which can be fired off and hit the target quickly.

The jab can be used in a variety of ways, as a range finder, a distraction or a feint, followed by the cross which does the real damage.

The jab can be doubled or even tripled up to get into range and set up the cross, but it’s a good idea to side step as you’re doing this to keep your opponent off balance. Coming in straight lines can be predictable and easily countered.

When thrown at the right time, this combination will usually catch your opponent completely off guard. The jab to the body makes your opponent dip forward and drop his guard slightly, then he’ll be open upstairs straight down the middle.

The body jab doesn’t always have to connect cleanly as it can just used as a distraction to set up the cross. Make sure that you don’t bend down too much otherwise it’ll just take longer to come back up.

The uppercut cross combination should only be thrown when you’re in close to mid-range. If you’re on the outside, you’d be too far out to throw the uppercut.

Also, make sure that you dip to the outside of your lead foot when throwing the uppercut, so you’ll be in position to throw the cross more effectively.

For this combination, when you throw the lead hook, make sure that you don’t put too much power into it because it’s only intended to be a set up hook.

If you throw with too much power and miss, you’ll end up rotating too far and even if you do hit the target, you’ll be slower to follow up with the cross. Both punches should be thrown with speed and accuracy.

The lead hook cross is great for setting up a mover also. If your opponent is near the ropes and moving to your left (from an orthodox point of view), then quickly throw your lead hook which your opponent should be moving into, then fire off the cross immediately after. You may miss the hook but you should be able to catch your opponent with your cross.

If you’re going to try and perfect any power punch first, then it should be the cross. When practicing on the heavy bag, don’t aim for power but instead, work on your speed and accuracy. The following fighters have very technically effective crosses:

A precise and fast cross equals power and it’s much more difficult for your opponent to avoid a cross compared to an uppercut and a hook. Practice the jab and cross often and you’ll hold a significant advantage over your opponents.