How to Throw a Hook

The hook is one of the hardest punches that you can throw, which is why it’s essential that you have a great hook. It can be thrown by using your rear hand but the term usually refers to the lead hook, which will be the primary focus in this article.

If you want to learn all the fundamentals of boxing, then I highly recommend the How to Box in 10 Days course, which takes you through boxing basics step-by-step.

The Fundamentals of a Hook 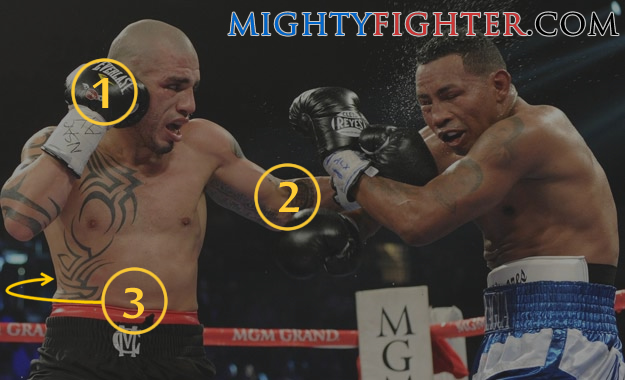 You can practice your power hooks on heavy bags, check out the top 10 best heavy punching bags here.

The ‘check hook’ is a lead hook that is thrown as you’re pivoting away from an opponent that’s coming forward.

To do this, you must pivot on lead foot, and then simultaneously swing your back foot 180 degrees to your outside. It’s similar to the motion of a matador moving out of the way of an incoming bull.

Like check hook, the back step hook is best used for when an opponent is coming forward.

You must just take a step back and then throw the lead hook as your opponent advances towards you.

The pullback hook is great for avoiding incoming punches while attacking at the same time. You must stay in a stationary position to perform this. Your body will be tilted forward slightly and when your opponent moves forward to attack, throw the lead hook and pull your body back slightly at the same time.

Don’t pullback too far and as mentioned above, don’t distribute your weight entirely on your backfoot. If you do this properly, you’ll dodge your opponent’s punch while landing yours. 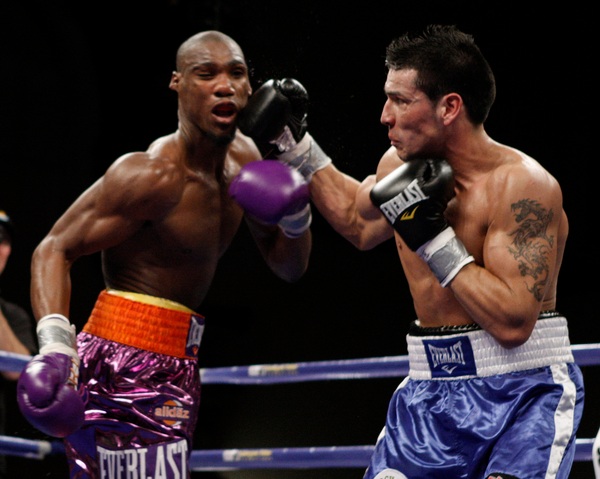 This is a cross between a hook and an uppercut. It’s a punch that’s thrown from below and connects to the edge of your opponent’s chin.

Your elbow should be pointed downwards at an angle of around 45 degrees.

Learn to throw a great hook to the body and you’ll be able to break down and take out your opponents easier. Aim to dig upwards at a 45 degree angle into your opponent’s kidney section.

The lead hook to the body is usually set up by a straight punch, which allows you to get into the desired position, where your body is tilted slightly to the outside of your lead foot.

To pull off the leaping lead hook successfully, you need to be fast, accurate, have good timing and good footwork.

Your opponent has to be just out of range, where you can push off your front foot to leap and throw the hook at the same time. It’s a risky move because if you miss, you may just end up leaping into a counterpunch instead.

As a note, a Mexican double end bag will help you to improve the timing and accuracy of your punches.

Using the Hook as a Counter

There are several ways in which you can use the hook as a counterpunch. You can either block or duck an incoming punch, then immediately throw your hook after, or you can roll a punch while throwing the hook at the same time.

With the right technique and amount of power, you can generate a knockout blow. For a more in-depth explanation and GIF images on counterpunches, visit our article on How To Counterpunch.

Setting up the Hook

The straight followed by a lead hook to the head or the body is most effective set up because it’s quick and can get you into the ideal position.

The straight can be thrown as a feint and if your opponent is not careful, then he will come forward to attack, but won’t expect you to follow up with a hook.

After you’ve thrown the straight, then you should pause slightly then come back with the hook. The pause enables your opponent to get back into the same position as he was in before, if he dodges your straight.

The method for this is pretty much the same as the straight > lead hook, but instead you’re leading with the overhand. Don’t put all your power into your overhand, as it’ll just leave you off balance if you miss. You can also feint the overhand to set up your hook.

After you’ve thrown the rear uppercut, you can comeback with the lead hook immediately after.

It’s important that you fire this combination fast to ensure that you won’t get caught after throwing the uppercut. Also, make sure that you don’t lead with the rear uppercut unless you’re on the inside.

Another effective way of setting up a hook to the body is by throwing your lead hook to your opponent’s head (not intended to be powerful, but rather just a tap), which causes him to bring his guard up.

This in turn, leaves an opening to his body, where you can dig in your lead hook.

When you’re in position to throw the lead hook to the body, dig it in and then immediately after, come back upstairs with the lead hook.

Many fighters will block the body shot, but completely forget about the head shot. It’s a great combination because both punches can be thrown with power.

This combination can confuse your opponent because it comes from opposite sides. Crouch down and throw a hook to the body using your rear hand, then come back up with a lead hook to the head.

Make sure that you rotate your body with both punches, pivoting (rear foot then lead foot) and rotating from one direction to the other.

Many fighters cannot pull off the double hook effectively, let alone the triple. It requires good speed and elasticity of your arm to throw the hook consecutively and quickly with the same arm. The trick is to not put in much power until your last hook.

The double and triple hook is useful if your opponent has a high guard and manages to block your first or second hook. Be careful if you try to throw more than three punches as your opponent may predict it and make you miss and even pay for it.

As you can see, there are so many variations of the hook and many ways in which you can set it up. You may wish to study the following fighters that are renowned for their powerful lead hooks.

It’s one of the hardest punches you’ll throw, if not the hardest, and one that you can land often. Take the time to know how and when to throw a hook.