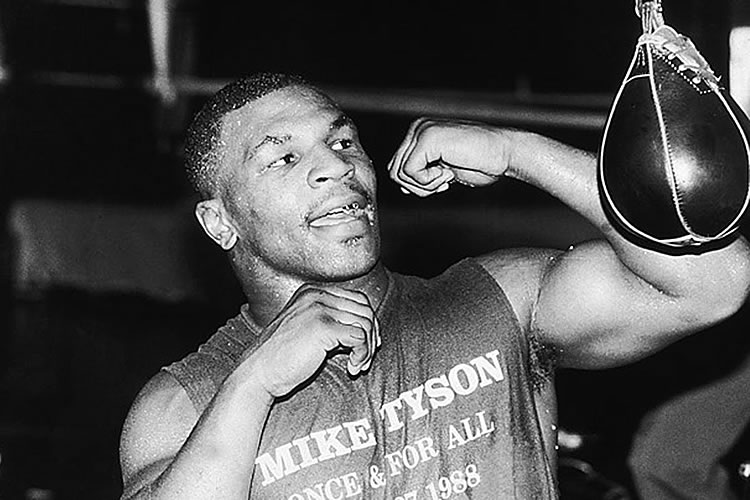 There was an aura of invincibility surrounding Mike Tyson in his prime and it reflected in his training. Nearly every fight resulted in a short and stunning knockout victory.

Tyson was 19-0 with 19 knockouts, and only 20 years old when he became the youngest ever heavyweight champ in boxing. This impressive feat had fans salivating in anticipation for his future fights, and had would-be opponents shaken up in fear.

In this article, we’ll take a look at the typical training routine day in the camp of a prime Mike Tyson, which was the foundation of all the fear and chaos unleashed in the late 90’s/early 90’s heavyweight division by “The Baddest Man on the Planet”.

There are plenty of interesting and motivational pointers to take away from Tyson’s training video.

Running in the Morning

“No one wants to get up at 4 and run in the pitch dark, but it has to be done. The only reason why I do it so early is because I believe the other guy isn’t doing it and that gives me a little edge”

That very philosophy is behind the success of a young Mike Tyson. But some may ask, does it make a difference whether you run in the morning or at night?

Most boxers choose to run in the early hours of the morning for various reasons including:

All in all, there are more benefits running in the morning than in the evening or night.

An Overview of Tyson’s Training Schedule

“The most difficult part of fighting is the training.”

That’s not a big surprise as many boxers have echoed this opinion too. At the end of the day, a full training camp in preparation for a fight is normally 6 weeks+, while a boxing match only lasts up to 36 minutes.

According to the video, Tyson trained Monday to Saturday, with an average of 55 hours in total or around 9 hours per day. He’d also spar an estimated 200 rounds and shed approximately 15lbs (6.8kg), which is not a lot at all. This tells us that Tyson stayed disciplined in terms of eating and didn’t baloon up in weight.

Mike Tyson’s former trainer Kevin Rooney incorporated the slip bag into Tyson’s training regime, which he had practiced on for 7 years.

“The purpose of the slip bag is to get the fighter moving his head…as long as the fighter’s trying to be elusive, he’s gonna be alright” Says Rooney.

The side-to-side movement, peak-a-boo style guard and bob-and-weave technique were a perfect match for Tyson’s short stocky physique, and the slip bag helped to refine attributes.

Rooney also stresses movement not only on the slip bag, but on the heavy bag too. His instructions to Tyson were to move 3 times after throwing a straight and twice after a hook. Rooney was drilling in the habit of evading counters after throwing a power punch.

Every punch had a number assigned to it by Rooney and Tyson followed it when hitting the mitts and in an actual fight.

This method of training proved to be effective for the duo, but only because they’ve both memorized each numbered punch down to a tee.

While the number system is not a new concept and many trainers use it nowadays, it’s not often instructed during fights. Perhaps the reason may be because most fighters have trouble memorizing the numbers, and/or trainers haven’t drilled it into their pupils enough.

Mike Tyson was a supreme physical specimen with a high degree of intelligence in the ring, but emotional issues outside which was taken advantage of. Had he continued to surround himself with the right people, who knows what he could’ve achieved.