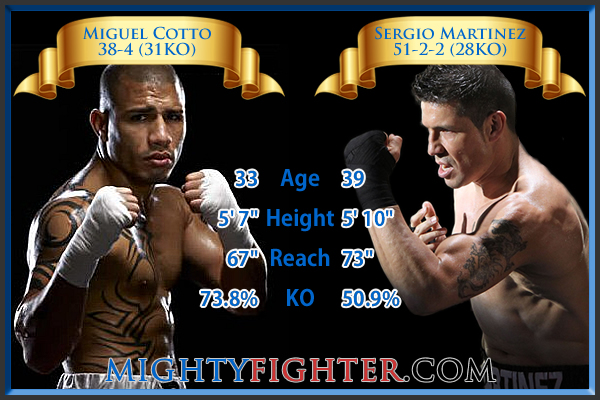 On June 7 at Madison Square Garden, one of the biggest boxing events of 2014 is taking place between Miguel ‘Angel’ Cotto and Sergio ‘Maravilla’ Martinez. This matchup has been brewing for the past couple years, and it has finally come to fruition. There are so many questions to be answered, and they will be answered on the night.

In this article, I’m going to provide a brief breakdown of each fighter, what they will have to do in order to win on the night, and finally, my prediction on who I believe will win.

Although he’s a small junior middleweight, Cotto is still physically strong and does hit hard enough to hurt his opponents. Whether he will carry his power up to middleweight is another story. Cotto is a seasoned veteran and an all-round fighter who has fought the best of the best throughout his career. Nevertheless, he has many weaknesses that Martinez can surely exploit.

Cotto must bang to the body and hips when he gets within range.

What Cotto Must Do to Win

This will be a very tough fight for Cotto to win. However, if Martinez’s legs have not fully healed, it’s a winnable fight.

Get Within Range
Easy to say, much harder to do. Although he has managed to do it against his previous opponents, Martinez is bigger, faster and a better outside fighter than practically all of Cotto’s past opponents. However, the times Cotto’s able to get within range, he needs to take advantage of Martinez’s low hands.

Martinez gets flustered when his opponents are able to get inside and throw combinations. He doesn’t cover up very well and often leaves his right arm down, even when he’s in the danger zone.

Blast out straight right upstairs (not one of Cotto’s strong punches) followed by the left hook, both punches that knocked Martinez down in the Chavez Jr. and Murray fights.

Work the Body
Cotto is the smaller man, but he’s physically strong and should be able to hold his own on the inside. If he does manage to get close, he absolutely needs to bang Martinez’s body and hips viciously in order to slow down his movement.

Non-Stop Pressure
Cotto is naturally an aggressive fighter who has good boxing ability, a style which poses problems for Martinez’s style. If he’s able to maintain consistent pressure for 12 rounds, then it’ll likely wear down Martinez, just like in the Chavez Jr. fight and also against Margarito (I know it was 14 years ago, but Martinez still makes the same mistakes, the only difference now is that he’s bigger and stronger than back then).

Again, this is a difficult task since Cotto is the smaller man with a weaker chin, and tends to fade late. This is the reason why it’s so important for Cotto up the ante the few times he’s able to get inside.

Gifted with elite athletic abilities, Martinez has often been able to outlast and outblast his opponents. He has quick feet, fast hands, hits hard, and has a style that most fighters find difficult to crack. However, this also comes at a price, as the same athleticism that has helped him, has also hindered him as he has gotten older with age.

Martinez is often off balance and keeps his hands down, even when his opponent is within range.

What Martinez Must Do to Win

Martinez holds the advantage in nearly every department. He’s the bigger man with the longer reach, he has quicker hands and feet, he has better timing and hits harder at that weight class. He needs to utilize all of these attributes in order to make easy work of Cotto.

Stay On the Outside
This will likely be Martinez’s strategy anyway. I cannot imagine that he’ll want to mix it up inside, unless he’s extremely confident that he can manhandle Cotto inside. Unlike Chavez Jr., Cotto will punch with Martinez should they go toe-to-toe. Martinez should stick to what he does best, and pot shot from the outside with 1-2’s.

Counterpunch Aggressively
Martinez is a counterpuncher, but sometimes he waits too much. This will allow Cotto to get his punches off first, and become more confident. Martinez needs to make sure that he wears Cotto down with aggressive counterpunching.

He needs to set up his counters with his jab and right hook, and throw his straight left when Cotto jabs or marches forward. At times when Cotto remains stationary, Martinez should pepper him with an array of punches. Pacquiao and Austin Trout (both southpaws like Martinez) enforced this tactic effectively time and time again.

Use Feints
Looking back at Cotto VS Pacquiao, there were a lot of feints used by Pacquiao to bring down Cotto’s left hand, which opened him up for the jab and right hook from a southpaw stance. Martinez can easily employ this tactic and with the significant reach advantage, he should have no problems landing either punch.

My Prediction On Miguel Cotto VS Sergio Martinez

Assuming that Martinez’s knee is at 100%, this should be somewhat of an easy fight for him. Even if his knee is not fully healed, Martinez should still win this fight handily due to his superior size, reach and speed advantages.

The factors that will seriously hold Cotto back in this fight are his shorter reach, lack of defense and tendency to fade in the later rounds. I don’t believe that Martinez will blast out Cotto, because he has proven to be a durable man with a lot of heart. Both his stoppages (to Margarito and Pacquiao) have come by TKO, and I also see the same result here.

Martinez will pepper Cotto with jabs and straight lefts from the outside and really cut up his face. It will soon dawn on Cotto that it’s very dangerous to get on the inside, as he’s going to eat a tonne of counterpunches for his efforts. It’s very possible that Cotto will get dropped with a punch he doesn’t see coming, but he will get up and continue to fight, as he always does.

It’s also possible (but less likely) that Cotto will drop Martinez and if he does, it will probably be due to bad balance. When it’s all said and done, I see either Roach, the doctor or the referee stopping it late on in the fight due to the amount of punishment Cotto has endured.