Ricky Hatton – How to Throw a Body Shot

Ricky Hatton is one of the most popular, and arguably one of the best fighters to come out of the UK. Although he’s not gifted with great athleticism nor technical brilliance, he’s gritty non-stop come-forward style and ferocious body attack has grinded down many of his opponents.

In this video, Ricky Hatton demonstrates how to throw a body shot and makes some excellent technical points as well. Starts from 0:24 onwards.

“I think it’s only natural, unless there’s something wrong, the minute you touch your opponent with a few nice little shots on the chin, they’re automatically gonna lift their hands up, so then you touch em’ touch em’ a few times, and then you come underneath.”

“I’ve got a pretty good reputation lately for knocking people out with body shots, so I think the most important thing I could say is that you disguise them well cos’ all your opponents know they’re coming but you still gotta work hard and you still gotta get them in using your footwork, stepping around the side, changing the angles and using feints to get the body shot in the pit of the stomach, so your opponents don’t know which angle you’re coming in from.”

“When you’re moving in on your opponent, you’ll be throwing body shots at him and each time your body shot goes in, he’s gonna be tensing, trying to take the sting out the punches, and you can only tense for so long, it’s not possible obviously for your breathing. The second he moves off the ropes, the first thing he’s gonna want to do is take a big gulp of air, so if you can catch him down the pit of the stomach just as he’s taking that gulp of air, it’ll have twice the effect on him.” 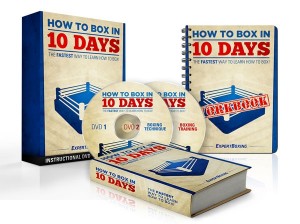 Are you a boxing newbie and want to improve your boxing skills quickly?

If the answer’s yes, then I strongly recommend that you check out the How To Box In 10 Days course.

This comprehensive but simple to understand program includes a 300 page eBook (broken down into 10 days of step-by-step instructions), 32 page workbook and 1.4 hour HD instructional video.