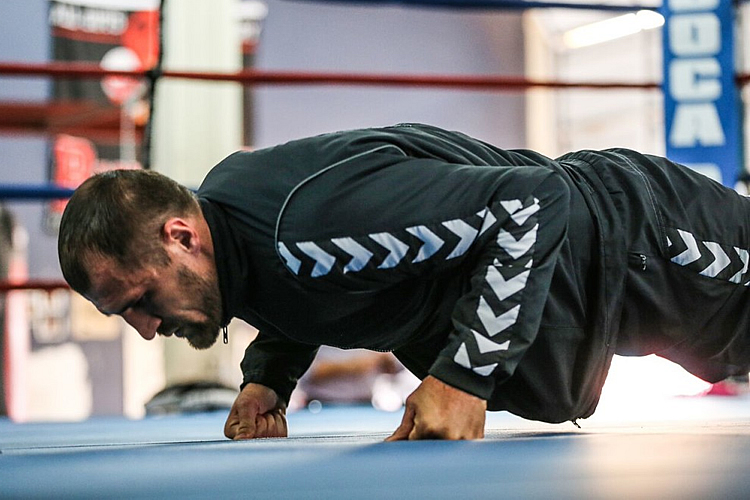 Superb knockout artist and all round scary mofo Sergey Kovalev has been tearing through the light heavyweight division with his uncanny punching power combined with underrated boxing brains.

The mysterious force known as “The Krusher” evokes curiorsity in his training regime. We no longer have to wonder because in this interview with FightHype, Kovalev’s strength and conditioning coach, Quan Paxton, gives a brief insight into how Kovalev prepares for a fight.

It’s not surprising to see hear from Paxton that training begins early in the morning, as it does for most fighters. Paxton also mentions that Kovalev trains in the mountains of Big Bear, California for about 3-4 weeks.

It’s quite short for a full camp so I presume some weeks of the training is done at John David Jackson’s gym (Kovalev’s trainer) in Jacksonville, Florida.

There’s a huge emphasis on cardio training, which is not surprising given Kovalev’s high work rate and intensity in the ring.

“Kovalev is a beast when it comes to running the mountains.”

Running uphill at an elevation of 2,058 metres must be brutally exhausting, and Kovalev does it nearly everyday.

Paxton also reveals that he implements a core training strategy for Kovalev – an hour in the morning and another in the evening, followed by much needed massages.

Of course, nothing else is neglected as each day is dedicated to a different body part throughout training camp.

When asked if Kovalev is a athletic guy (which judging by his performances, he is), Paxton says:

“I would describe him as the body of Tommy Hearns, with the mentality of Marvin Hagler, with the voice of Drago!”

That’s quite a flattering comparison though Sergey is bigger than all those guys except maybe Drago, who wasn’t a real boxer so that doesn’t count.

“He’s lean, but he’s naturally strong and powerful like Tommy was. If he lands that right hand on you it’s good night.”

We all know that Kovalev can punch, but how does he train for punching power? Or does it all just come natural to him?

It’s safe to say that most of Kovalev’s punching power is natural. He’d be a big puncher with or without training, but it’s through certain training methods that this power is refined even further.

While calisthenics can improve punching power because many exercises are explosive and trigger fast twitch muscles, you may be thinking what does flexibility have to do with punching power?

You only have to look at body positions of certain flexibility exercises to see that they can improve balance; a key ingrediant in one’s ability to punch hard. Also, it loosens/warms up the muscles and joints so that it’s a lot easier to perform dynamic movements such as punching while minimizing the risk of injury. That explains why the majority of fighters stretch before training and actual fights.

Paxton doesn’t reveal any specific exercises Kovalev does, but a quick search on Youtube would show him performing medicine ball throws and slams, jumping jacks, knuckle push ups and even a bit of wrestling.

It’s refreshing to see that such a feared puncher in Sergey Kovalev sticks to the basics that have garnered him much success, and it’s interesting to see Kovalev would adopt other training methods in the future.