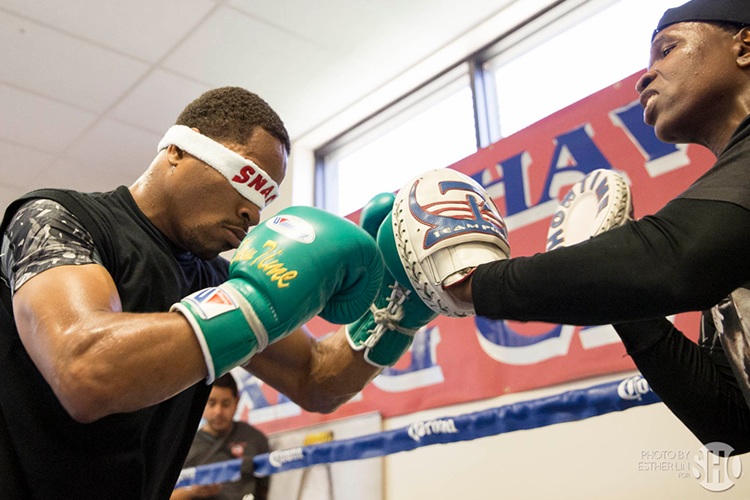 Despite not being gifted with natural boxing ability, Shawn Porter has an extraordinary work ethic, respectable strength and power, and good athletic ability. Those attributes have helped him reach the top of the welterweight division, so it’s interesting to see what type of training he undergoes.

This video from Muscle Madness shows us the type of training Porter does. The variety of his exercises are impressive and some that you may never have seen before. Most of them take place at Porter HyPerformance Center, a modern training facility that’s owned none other than Shawn Porter himself.

Some of the exercises in his training regime that are worth pointing out include:

Padwork With an Elevation Training Mask [0:09] [8:18] – The elevation mask Porter is wearing controls oxygen levels to simulate high altitudes, as if he were training in the mountains. I’ve seen Nonito Donaire use one of these too.

You can also see Porter working the body protector while wearing an elevation training mask at [1:56], and you can see the tube running through to the mask.

There are other elevation masks that aren’t actually hooked up to a machine that controls oxygen levels. They’re worn independently, so they’re not as effective. You may have seen some other boxers wear this type of elevation mask as they’re getting increasingly popular.

From my understanding, the whole point of elevation training masks is to improve your aerobic endurance by limiting your oxygen intake. But just how effective is it?

I know for sure that it’s not as effective as actually training at high altitudes, which actually does produce more red blood cells and push the boundaries of your body’s oxygen capacity, thus improving your aerobic endurance.

If you’ve used one of these elevation training masks and/or have good knowledge of how they work, I’d love to read your input in the comments section below.

Footwork Training [2:41] [6:35] – Through a course of training cones and floor guides, Porter works on his foot speed and foot positioning when he’s fighting on the inside and coming forward. It doesn’t come as a surprise that he implements these in training since he use to be a football player during his high school years.

Body Punching in Oxygen Chamber [2:56] [4:25] – I think by now you’re getting the idea that Porter is quite into his high altitude simulation training, but this just takes it to another level. You see Porter hitting the body protector and the heavy bag while inside what appears to be a chamber that controls oxygen levels.

Step Jumps While Catching Cards [5:08] – Performing step jumps is not a new concept but there are two things that Porter does differently. Firstly, he’s performing them on a balance trainer instead of a plyo box. Not at all unsual since it can help to improve balance.

Secondly, someone is throwing playing cards at Porter and he’s trying to catch them. This is supposed to help with hand eye coordination though it probably would’ve been more effective using small ping pong balls or something similar instead.

Is Shawn Porter Overdoing It?

I get the feeling that some of his training methods may be a bit uncessary and some of the time is better served to improve boxing fundamentals and technique.

We’re in an era where many fighters are experimenting with new modern methods of training when sometimes, sticking to the basics is all you need.

What do you think about Shawn Porter’s training methods?

Are there any improvements you feel he could make in his training?

Air out your opinion in the comments section below.