How does a boxing phenom train and what kind of exercises does he do?

That greatly varies from fighter to fighter, but you’d probably want to learn from one of the hardest punching middleweights ever in Gennady Golovkin.

In a physical sense, the Kazak boxing prodigy known as GGG is not only known for packing a punch, but he’s also very strong and that comes from the core and legs which can be attributed to the following workouts.

Here are 10 of the best Gennady Golovkin exercises.

Shadowboxing is the most fundamental method of training a fighter must do. It helps you to perform the correct punching technique, visualize and strategize around an imaginary opponent and improve footwork.

From an aesthetic point of view, it helps to tone your upper body muscles shadowboxing with hand weights. I’d recommend using 0.5 or 1KG weights which is ideal as they’re not too light so you don’t feel them, and they’re also not too heavy that they’ll affect your technique.

This way, you’ll also improve speed when you work on short, quick and explosive punches because you’re developing your fast twitch muscles in your upper body.

Your oblique muscles are located at the side of your abs. They’re used everytime you use lateral movement which will be a lot if you’re a boxer.

You need to develop the endurance of these muscles in order to twist and turn at the waist (from either punching, slipping or bobbing and weaving) without getting tired.

The seated oblique twist is a common exercise for fighters but to make things a bit more intense, add a weighted plate to work those muscles even more.

The standard sit-ups can be damaging to your neck and back especially if you don’t have the right form. Ab crunches are a common but effective exercise for toning your abdominal muscles.

The key for progression here is high repetitions. Gennady Golovkin does hundreds of these everyday that he’s in training camp and every other world class fighter would be doing the same.

You’ll probably see this piece of equipment at every gym you go to. The ab wheel is basically a small wheel with two handles at the side that’s perfect to strengthen your core. 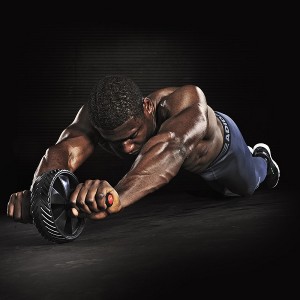 From a standing, kneeling or push up position, you hold the ab wheel with both hands in front of you, then you roll it forward until your arms are fully stretched out and then you roll it back to your original starting position.

Though it may look easy, it’s actually a lot harder than you think since this exercise is like a plank but with dynamic movement instead, which makes your core work even harder.

5. Side Twists with Workout Stick/Body Bar

Though I haven’t seen a whole lot of boxers do this kind of exercise, it’s pretty popular in martial arts. It will tone your muscles depending on which particular exercise you do and great for strength training when combined with resistance bands.

For martial artists and boxers alike, it’s ideal for improving your form and dynamic movements which all punches are based around.

For the bar itself, you can purchase a weighted body bar/aerobics bar, or simply just use any stick that’s thick and long enough to support these types of movements.

This exercise is similar to the side twists above, but you use a shorter and weighted bar to rotate in big circles in front of you, one way after the other.

This rotational movement closely mimics how an overhand or hook is thrown, so it’s great for developing the muscles associated with those punches.

One of the best ways to burn calories and at the same time increase anaerobic endurance is by doing interval sprints. In explosive sports such as sprinting, boxing, MMA and basketball, this type of endurance is vital because it allows you to exert the maximum amount of energy in the shortest space of time.

This differs from aerobic endurance sports such as long distance running since you need to maintain a lower work rate for a prolonged time.

In boxing, where speed, power and strength make all the difference to one’s ability in the ring, you need to be able to throw punches (often in combinations) at maximum force at any given time. Interval sprints can help you prepare for this kind of intensity.

If you really want an exercise that wil challenge you physically and mentally, give the weighted sled a try. You can increase or decrease the weight depending on how intense you want it.

There are two ways you can do the sled – push or pull. You push it by holding onto the lower or upper bars (the lower you hold it, the harder it is) and you pull it via a rope or chained handles just like how Gennady Golovkin does it in the above video.

It does wonders for burning calories and improving your cardio. It works your traps, but it’s your glutes and quads that will be crying out in pain after doing it.

Does a strong neck really give you the ability to be able to take a punch better?

The answer is both yes and no.

If you have a weak chin, then unfortunately, there’s not much you can do about that except for work on your defense. Someone with a strong chin can take a punch regardless of how strong their neck is.

However, in both cases, you may be able to minimize a knockout situation by strengthening your neck muscles so that when hit, your neck will not rotate as rapidly leading to less shaking of the brain.

Some boxers that work on neck strengthening exercises using weights or some other form of resistance include Gennady Golovkin, Mike Tyson, Floyd Mayweather Jr. and Anthony Joshua.

Stand up wrestling plays a bigger role in boxing than you think. If you’re able to push your opponent back in clinches or when you’re fighting on the inside, you’re taking charge of the dominant role.

Of course, this doesn’t lead to winning a fight, but it gives you a huge advantage over your opponent not only physically, but mentally too because your opponent will now know that you’re the stronger person. It sapps your energy and dents your confidence when you’re being pushed around.

While I don’t believe wrestling is a staple in GGG’s workout routine, he has engaged in it before as seen from one of his sessions, and he didn’t make a bad account of himself against a natural grappler.

To date, no one has ever been able to push Gennady Golovkin around the ring and though he may not look it, he’s very strong which is evident in his sparring sessions against bigger men and in his fights during clinches.