Samuel Ha
Fighter AnalysisVideos
The general public love to see knockouts. Fighters that have tremendous power and know how to utilize it, often captures the attention of the media and public thus making them a bigger name in the sport.

Here are 10 of the hardest punchers in boxing of the 2000’s in which many of them have either revitalized their careers at some point thanks to their amazing punching power. 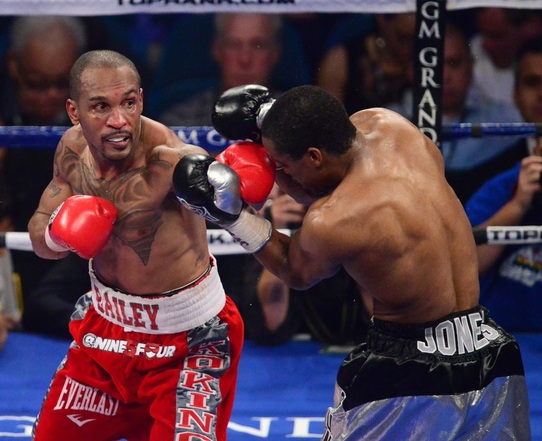 “The Knockout King” is certainly a fitting nickname for one of the hardest pure punchers in boxing. Randall Bailey is a 3-time world champion in 2 weight divisions (light welterweight & welterweight) and can also turn the fight around at any point with just one punch.

His most notable shot being his straight right hand which he delivers with so much accuracy and velocity that many opponents don’t get up from.

Most recently, he was fed to up and coming undefeated prospect Mike Jones because Jone’s management believed that Bailey was done.

Behind on the scorecards massively, Bailey produced a spectacular knockdown in round 10 and finished Jones off with a brutal uppercut in the following round to capture another world title. 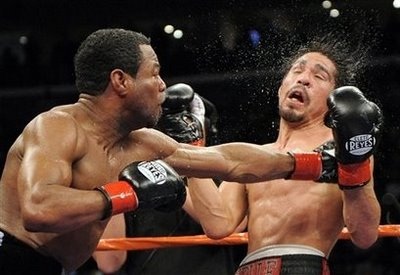 Shane Mosley’s most high profile fights came when he moved up to the welterweight division, some of which he won and others he suffered losses. However, there was a time when Mosley just destroyed opponents in his days as a lightweight.

Before moving up 2 weight divisions to face Oscar De La Hoya, Mosley was 34-0 with 33 KO’s. Even as a welterweight, Mosley feasted on fighters that had poor defense even though they had a good chin, such as Antonio Margarito.

With power in both hands, Mosley could hurt any opponent but he was most noted for his overhand right which struck with great speed and force. 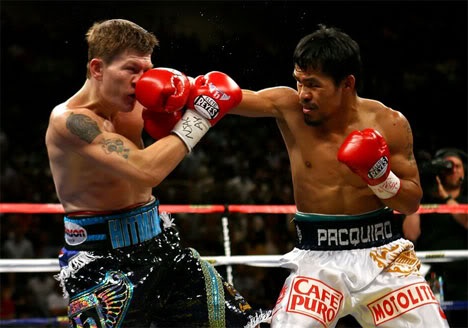 From his days as a light flyweight all the way through to light middleweight, Manny Pacquiao has managed to move through the weight divisions while still retaining his speed and power, an amazing feat.

During recent years, the southpaw fighter has improved his right hook but it was his straight left hand that struck fear in many opponents.

It would be delivered with such speed and intensity that it often had devastating results. The punches that hurt the most are the ones you don’t see, and with Pacquiao’s speed, this is usually the case. 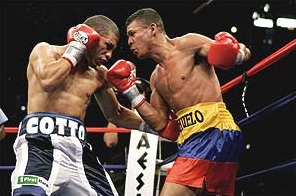 Ricardo Torres was tough and powerful fighter from Colombia. He had an impressive 28-0 record with 26 KO’s when he met another similar fighter, Miguel Cotto of Puerto Rico.

Although Cotto wasn’t as powerful, he was the better boxer with better accuracy and determination.

It was a back and forth war and even though Torres lost the fight, it was he who hurt Cotto time and time again with his heavy hands.

After a few more wins and a controversial loss to Kendall Holt, Torres disappeared from the boxing scene leaving behind a record of 33-2 (29 KO’s). 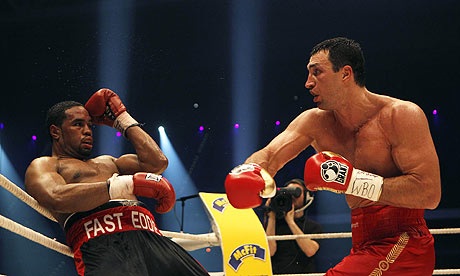 The Klitschko brothers have been the most dominant heavyweights of this era. Both have huge power and because of their height, reach and defense, they’ve been very hard to beat.

The younger brother Wladimir is nicknamed “Dr. Steelhammer”. I can only imagine that it has something to do with his hammering right hand that completely paralyzes his opponents.

The 5th longest reigning Heavyweight Champion of all time is athletic for someone who’s 6ft. 6in, which is why he can score over 50 KO’s in his career while avoiding hard punches himself. 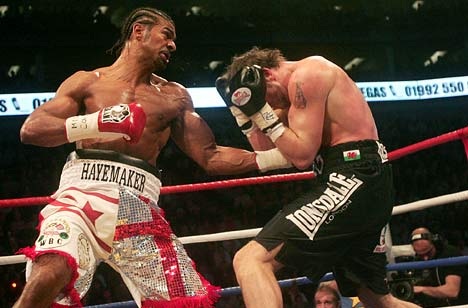 Londoner David Haye carried his speed and power up to the heavyweight division after taking care of business in the cruiserweight division.

Although many times he goes into a fight as the smaller man, Haye’s power in both hands makes his opponents respectful of him.

He managed to rock 7ft giant Nikolai Valuev in the last round of their fight, and dropped the sturdy John Ruiz several times and eventually stopped him in their match-up.

Although Haye doesn’t have the best stamina, his power can make all the difference when his opponents try to pounce on him.

The extremely heavy handed Argentinian was 27-0 with 24 stoppages before he met former world champion and slick fighter Zab Judah.

Although he got Judah’s respect throughout the fight and dropped him in the 10th, Matthyse started too slow and lost a very close fight in which many thought he deserved the win. 7 months later, he faced another Southpaw Devon Alexander, who was similar to Judah.

Yet again, Matthyse dropped his opponent and pressured throughout the fight, only to lose a close fight in Alexander’s hometown.

These losses would determine the outcome of Matthyse’s next performances and no longer would he rely on the judges, instead he has come away each time with impressive knockouts against top opposition. 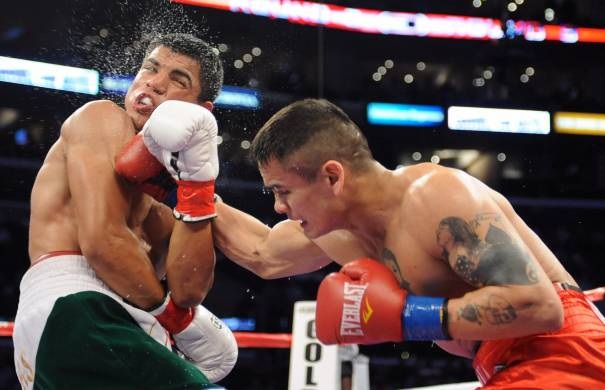 There has been a recent wave of hard punchers from Argentina and Marcos Maidana is one of the most well-known. He was virtually unknown when he had his first fight on US shores against undefeated and the highly touted Victor Ortiz.

Although it was supposed to be a showcase fight for Ortiz, it was also a very dangerous one because Maidana had only suffered one close loss in Andriy Kotelnik’s hometown and had a record of 23-1 (21KO’s).

Their fight turned out to be a war in which Maidana was dropped 3 times but undeterred, he dropped Ortiz and pressured throughout while landing bombs and eventually, made Ortiz quit.

This fight would make Maidana into an overnight sensation and one of the most feared punchers in his weight division. 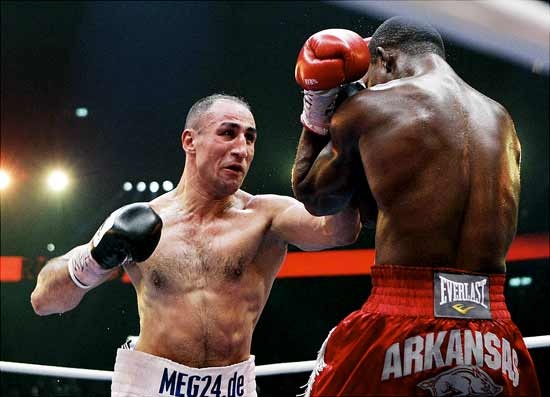 Germany based Armenian Arthur Abraham has a reputation of being a mentally tough fighter and a big banger.

He proved his power in all his fights leading up to his infamous first battle with fellow banger, Edison Miranda from Colombia. It was this fight that proved to the boxing world how tough Abraham really was.

He had to overcome dirty tactics and a broken jaw in two places from round 4 onwards, to prevail in the fight.

After the fight, Abraham had 22 screws placed into two titanium plates to fix his jaw. Abraham would get his revenge in the rematch where his punching power would put Miranda down 3 times and out in the 4th round. 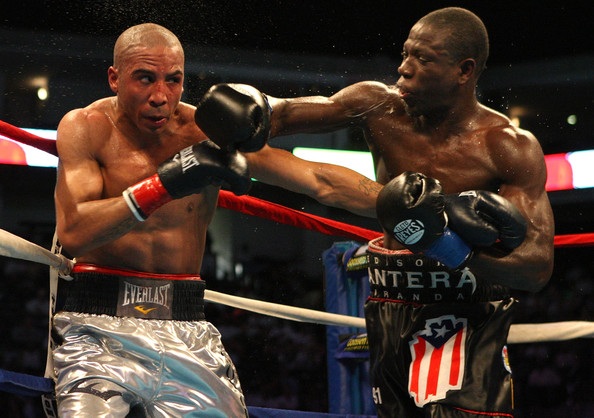 The big banger from Colombia has had a tough road to get into the limelight of boxing.

Abandoned by his mother at one month old and again at age 9, Miranda took up boxing at 15 and has never looked back ever since. His power has been a gift and a curse because he would often rely on it a bit too much.

Everytime he stepped up to the upper echelons of the boxing world, it was either knock the opponent out or be knocked out.

Unfortunately for Miranda, the latter would often be the case. However, his losses hasn’t prevented him from producing spectacular KO’s over lesser opponents and this has resulted in an impressive highlight reel of knockouts.