Top 10 Tips On How to Become a Boxing Superstar 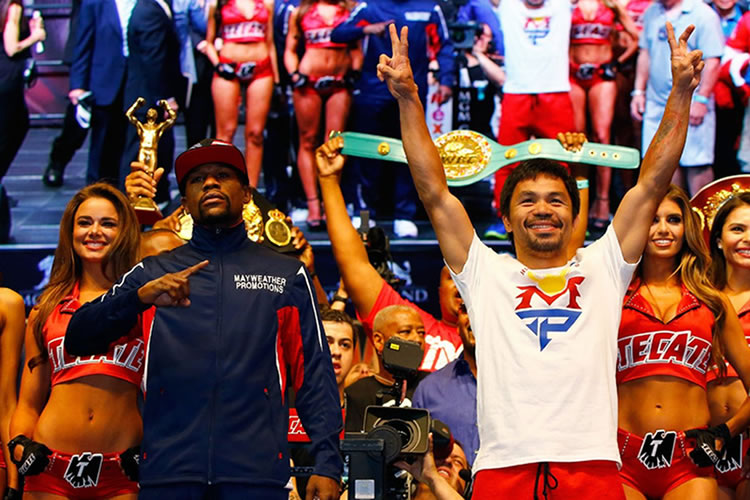 If fame and fortune are the only reasons why you’re getting into boxing, then chances are you’ll end up with neither. They are reserved only for those who train the hardest, fights the toughest and operates the smartest outside the ring. How long those benefits last for merely depends on how skilled you are as a prizefighter.

There’s a huge learning curve especially if you’re new to boxing, so to give you a boost in your journey, here are 10 tips on how to become a boxing superstar. Bear in mind that it’s not necessary to meet all the following points to succeed, but the more the better.

How do you appeal to viewers and engage with them on a personal level in and out of the ring?

You need to have charisma (i.e. exude an aura of charm that will captivate your audience). For some people, it comes naturally while others have to work on it.

A surefire way to develop charisma is by showing supreme confidence without being cocky. By being confident, you’re a lot more likely to display your natural character rather than hide behind a mask. If you have an endearing personality, then even those who dislike your boxing style cannot deny your character.

It amazes me how little online presence most name boxers have; and I don’t mean just throwing up a website, a Facebook, Twitter and Instagram page and updating them every now and again. They need to be actively managed and promoted often so they capture new fans and remain relevant to existing fans.

Anyhow, take heed of this and try to learn some basics in online marketing if you cannot afford to hire an expert. Just to show you how powerful social media can be, take for example the 16-0 prospect Gervonta Davis.

You may not have heard of him but he has more Instagram followers (177k) than many elite and world class fighters. He’s very active on that platform and some of his padwork videos have gone viral on Facebook with hundreds of thousands of views.

Had he not had an online presence, he’d probably just be known as TMT Promotion’s cocky power punching prospect, if you even knew that. Now, he’s also known as that guy that does the sick padwork.

3. Capture a Huge Fan Base

In many cases when it comes to boxing, if you’re born a certain race or represent a certain country, then you’d automatically get to enjoy the support of your people, and often in large numbers if you have charisma and skill.

This is true for the Mexicans, British, Polish and Argentines among others. But what are you supposed to do if you don’t have that privilege? 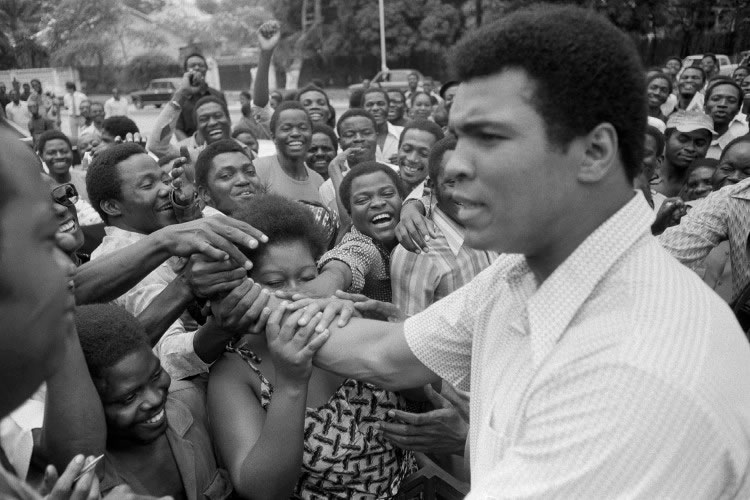 Then you’d have to find a selling point about yourself and sell it to a particular audience.

Let’s take Floyd Mayweather Jr. for example. Before his blockbuster showdown with boxing superstar Oscar De La Hoya, no one outside of hardcore boxing fans really knew or cared for his pure boxing style and “Pretty Boy” image.

He made people pay attention by being brash and flaunting his wealth and undefeated record. This persona (whether real or fake) drew support from the Hip-Hop audience who glorifies this type of behaviour, as well as drawing hatred from opposers of his “boring” defensive style, selection of opponents and arrogance. Either way, both audiences paid to see him win and lose.

If they continue down the same road then their star can only shine brighter. You need to discover what makes you appealing and how you can market that to a sizeable fan base.

4. Get a Great Management Team

I’ll be the first to admit that I don’t know all the intricate tasks that a boxing manager does. However, it’s clear to me that a great management team will be partly or fully responsible for putting together the best team to train the fighter, negotiating the best financial deals, putting you in the best match ups and guiding you with career moves.

It’s wise to do a bit of research to find out which manager has a proven track record as signing with the wrong one can leave you in a stalemate position.

It’s also possible to be your own manager but without solid experience and connections, you’re going to have a real hard time accelerating your boxing career. Leave it up to managers to manage and promoters to promote while you focus on fighting.

5. Get Signed By a Great Promoter

A promoter is responsible for finding talent (though a manager can do that too) promoting events and negotiating deals with media. Therefore, it makes sense to try and get signed by a promoter that has a wealth of experience in the industry.

Signing with the wrong one is pretty much like narrowing down your future opponents as no promoter is willing to work with another promoter who’s fighter can drop the stock of their own fighter (remember, promoters are looking out for their own financial interests!).

So how do you get signed by a great promoter?

That’s a good question and surprisingly simple. You have to convince them that you’re a worthwhile investment. You do that by showing them that you’re reliable in training and media responsibilities, that you’re a good fighter and also you’ve raised your own profile (this is why it’s so important so market yourself from the start!).

That or be a god gifted boxer who has won an Olympic Gold.

6. Have a Fan Friendly Style

If you don’t have the “gift of the gab” to help sell a fight and you’re not entertaining in the ring, then you’re going to really struggle to put bums in seats. Boxing is the entertainment business and viewers want to get their money’s worth at the end of the day.

It’s understandable if you don’t have a flamboyant personality outside the ring, but you better make sure that you give fans a reason to watch your fights.

You’ll practically be a guaranteed attraction if you consistently produce knockouts and spectacular performances.

Of course, this may go against you if your style is largely based around a safety first approach. However, you cannot have it both ways. Take calculated risks and learn how to fight in the pocket while still being defensively responsible.

7. Be Willing to Take On the Toughest Challengers

Unfortunately, boxing is now in an era where promotional and network conflicts as well as individual egos often prevents the best fights from happening. Though if there’s one lesson that we can take away from boxing history, it’s that if both sides really want to make the fight happen, all conflicts can be overcome. 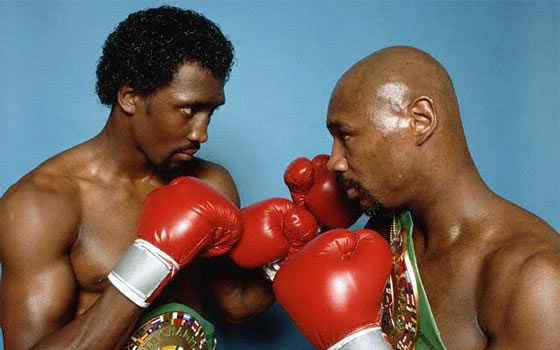 Tommy Hearns VS Marvin Hagler – one of the greatest fights of all time in an era when the best often fought the best, and great fights were the norm.

It’s frustrating to hear fighters pass on all match making responsibilities to their managers and promoters. Granted, that’s part of their job, but it gives the notion that the fighter in question doesn’t have the desire to chase down the toughest challengers. It’s simply an easy way to “duck” a fight without outright being seen as a ducker.

That’s the reason why fans revel in the courage and ambitions of fighters who make it their responsbility to make a fight happen, and to put in a great effort when it does happen (as opposed to just picking up a paycheck). Win or lose, that’s how respect is earned and that’s how boxing superstars are born.

Boxing is a sport that doesn’t wait for anyone. When you’re in the process of building your stardom, it’s not good enough to just fight once or twice a year. You need to build up a good momentum which will hopefully snowball into an unstoppable force.

This further highlights the importance of having a good manager and promoter who can consistently get you the right fights. It’s not unreasonable to fight 3, 4 or even 5 times a year.

Hell, Mike Tyson fought 15 times in the first year of his pro career and 13 times in his second year! That’s almost unfathomable these days but not surprising at all back then.

Just remember that each fight is like an investment in your career and with each good performance, your stock increases. Being stagnant is a good way to ensure that you’re quickly forgotten about.

Fighting often is one way of staying relevant in the eyes of the public but it’s not the only way. There are plenty of ways you can stay in the minds of boxing and casual fans. Interacting with fans on social media, holding meet and greets and just making noise in general.

In this digital era where there’s an overload of information, it’s difficult for people to remember things unless they’re constantly reminded of it. Basically, actively remind the people of who you are and what you do without coming across as an annoying salesman.

And if the sake of staying relevant isn’t motivating enough, then do it for the money because the more relevant you are, the more people will pay to watch you fight and the more you’ll get paid (that is if you’re not getting ripped off by your manager and/or promoter).

10. Stay Dedicated to Your Craft

Above all the hype and drama, none of them matter if you don’t train hard and constantly try to improve the art of boxing. What’s the point of trying to become a boxing superstar if you always enter the ring unprepared and you’re constantly taking Ls?

Having great defensive skills and ring intelligence is the key to longevity in boxing, and if you are a quiet and reclusive individual with the aforementioned qualities, then simply being a great fighter will eventually bring you some success and status in the boxing world.