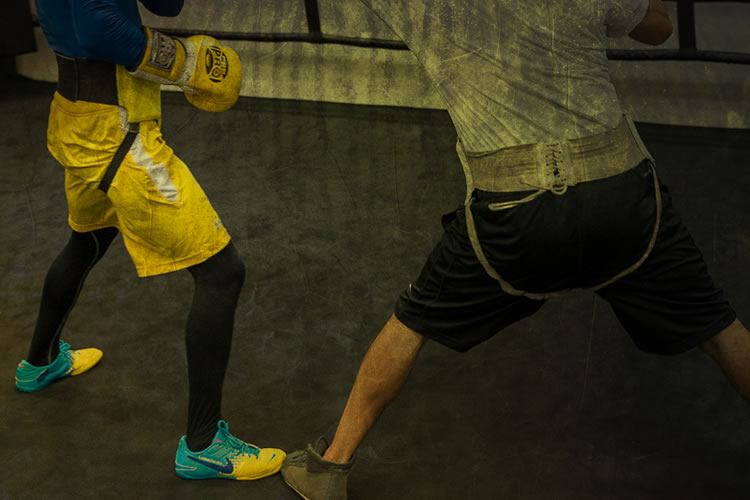 How do you box on the backfoot without being labelled a runner?

How do you chase down an opponent who is constantly on the run?

And how do you relieve the pressure from a brutally aggressive fighter?

It all boils down to how you use your footwork in boxing. You don’t have to do laps around the ring to get away from punches yet it doesn’t mean you have to always stand in front of your opponent. Here are 10 of the best tips on how you can effectively improve your boxing footwork.

Bonus Tip: The Dancer’s Footwork For Fighters is a special course that blends classical dancing and boxing footwork together to help boxers with their balance and co-ordination.

One of the first steps to improving your boxing footwork is to shadowbox while focusing mainly on your foot movement. Try to work on subtle small steps and pivoting while simultaneously punching or moving your upper body, rather than long and wide movements that wastes energy.

Just remember to stick and move constantly i.e. punch and move. This also helps you to improve hand-foot-eye coordination.

Shadowboxing is such a fundamental part of boxing training that shouldn’t be neglected. You can literally do it almost anywhere so there’s no excuse not to do it.

Whether or not you have the reach advantage over your opponet is redundant if you cannot control range, which in boxing basically means fighting from the most optimal distance where you can hit your opponent but making it difficult for your opponent to hit you.

You can work on controlling distance by employing footwork to move around a heavy bag or using an object as a focal point (such as an outdoor post or a tower fan). Where possible, use a mirror so you can see where your foot placement is and should be.

Defending against your opponent in small steps is a lot harder than circling the entire ring while letting your opponent chase you down. The latter method not only uses up a lot of energy, but it’s also off putting to spectators. You may not care about that but nonetheless, it’s often not necessary.

Work on taking quick one, two and three small steps forward and backwards, as well as medium strides. This helps you to advance when your opponent retreats and retreat when your opponent advances; all relating to control of distance.

Constantly standing in front of an opponent who is bigger, physically stronger and punches harder is a recipe for disaster; while allowing him to dictate the pace and gain momentum by “running” away may allow you to survive a few more rounds, but ultimately the end result will probably be the same – you lying flat on your back.

So how exactly do you fight this type of opponent?

Creating angles with lateral movement and keeping the bull off balance. The way to do this when you’re in close range is to pivot on your front foot while swinging your backfoot in the same direction so you end up at your opponent’s blind spot.

This is where you’re in a relatively safe zone, where you’re at an angle that allows you to punch your opponent without fear of any counterpunches. This is essentially what “creating angles” mean.

5. Use Your Opponent’s Strength Against Himself

There will be times when your bigger and stronger opponent will impose his size and physical strength on you. He might push you, lean on you and hold you; all of which will sap energy away from you. 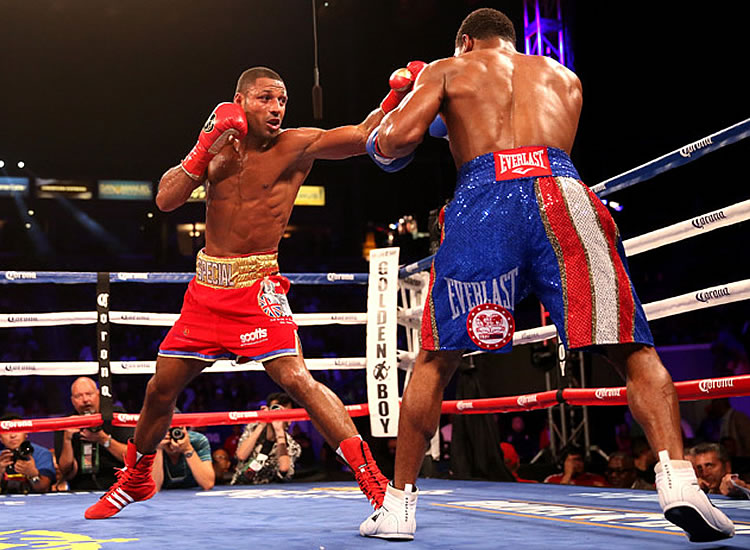 Well, you can actually use your boxing footwork to use your opponent’s strength to your advantage. When he tries to lean on you or hold you, make him fall forward by stepping to the side or taking a step back to create an opening for an uppercut.

This is where a sparring partner can help you by acting out this scenario. Stay on the inside while your partner is constantly pushing forward and your job is to step around him and step back. Allow yourself to be pinned to the ropes and work off them too.

6. Get a Dance Partner

Not literally of course, but someone you can practice your footwork against. There doesn’t have to be any punches involved because the main focus is how you will use your movement against a certain type of opponent. Your partner will take on roles of different boxing styles – the boxer mover and the pressure fighter.

You’ll practice closing the distance and cutting the ring off on the mover by using intelligent footwork – using the least amount of steps, not lunging in and maintaining good balance throughout.

Against the come-forward fighter, you need to create and maintain distance by using stepping back laterally and pivoting if the opponent manages to get inside.

Not everyone can be a switch hitter. There are only a few who have that natural ability to punch and defend no matter if they’re in a southpaw or orthodox stance.

However, your boxing footwork will be greatly improved if you have some basic understanding about how to smoothly transition from one stance to the other.

You may accidentally switch stances during a fight against someone who may try to take advantage of this mishap. In this situation, you must either punch and move or simply use your footwork to get out of the way. Consistently practicing boxing footwork in the opposite stance will prepare you for these situations.

If you’ve done any sort of explosive sports, then the chances are you’ve performed some plyometric exercises. They’re designed to increase explosive power (speed and strength combined) through exercises that exert the maximum amount of force in short intervals.

You can find some of them here. Some of the most effective plyo footwork exercises are:

Each exercise has their own benefits but all provide the same result of increasing the speed and strength of your legs, which is essential if you want to maintain good footwork throughout an entire boxing match.

The worst place to get tired is in the ring. When your legs gradually turns to jelly and you can no longer move how you want to, that’s when survival mode kicks in. You want to try and avoid that situation and one way of doing that is to improve the conditioning of your legs.

Practically all boxers with great stamina run early in the morning or late at night for at least 5 days a week, progressively improving their best time in each session. It’s gruelling but it’s necessary to become a great athlete.

If you have leg problems then an alternative (not a substitute) would be to cycle instead; it’s what Sergio Martinez did. But cycling means you’d have to cover longer distances for the same or similar results than what you’d receive in a shorter distance run.

You’ve probably seen the fancy jump rope tricks Floyd Mayweather Jr. or Brian Viloria does and you think to yourself “yea, that’s nice, but it won’t help you in a real fight will it?”.

Actually yes. Yes it does. Purely in terms of having a better sense of foot coordination and timing. Obviously, it won’t help you if you’re getting pummeled at an alarming rate; you’d have to fight back in that instance.

Aside from improving your boxing footwork, jumping rope is a good cardio exercise and incorporating various tricks into your jump rope routine will serve to up the intensity. You can check out some of the best jump rope exercises here.