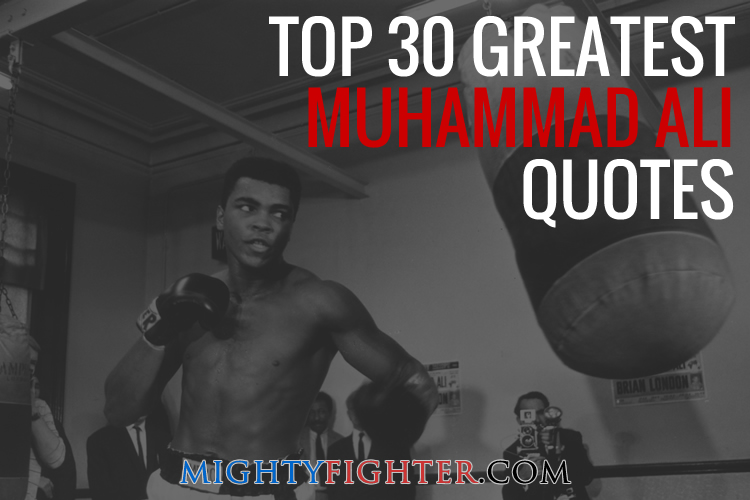 One of the greatest fighters ever to lace them up was Muhammad Ali, formerly known as Cassius Clay. He’s a legendary sportsman and showman, and was never short on words.

Not only was Ali was part of an era where the best consistently fought the best, but it was also a time where political and racial divide was prevelant, perhaps even more so than today. His strong stance on many sensitive issues caused controversy but made him an inspirational figure for years to come.

You can almost feel his emotions echo through his words. Here are 30 of the greatest Muhammadi Ali quotes.

2 “If you even dream of beating me you’d better wake up and apologize.”

3 “Float like a butterfly, sting like a bee. Your hands can’t hit what your eyes can’t see.”

4 “I hated every minute of training, but I said, ‘Don’t quit. Suffer now and live the rest of your life as a champion.'”

5 “To make America the greatest is my goal, so I beat the Russian and I beat the Pole. And for the U.S.A. won the medal of gold. The Greeks said, ‘You’re better than the Cassius of old.'”

6 “I wish people would love everybody else the way they love me. It would be a better world.”

10 “To be able to give away riches is mandatory if you wish to possess them. This is the only way that you will be truly rich.”

11 “Ain’t no Vietcong ever called me Nigga!” – On his refusal to fight in the Vietnam war.

13 “Whatever truculent means, if that’s good then I’m that.” – After being called truculent by a reporter.

14 “I don’t care how small the ring is, I’ll fight that chump in a telephone booth.”

15 “Look at me. Look at my nose, perfect shape; lips, face. Now I’m not boasting, but it’s hard to be humble when you’re as pretty as I am.”

16 “He who is not courageous enough to take risks will accomplish nothing in life.”

17 “You think it’s easy, come take his position. You’ll find out that I’m a witty person and it’s kinda hard to talk to a person like me.” – On the Michael Parkinson show in 1974.

19 “Silence is golden when you can’t think of a good answer.”

22 “Service to others is the rent you pay for your room here on earth.”

23 “I done wrestled with an alligator, I done tussled with a whale; handcuffed lightning, thrown thunder in jail; only last week, I murdered a rock, injured a stone, hospitalised a brick; I’m so mean I make medicine sick.”

24 “They fear, and they’re weary. It looks dangerous to them, but it’s not really that dangerous to me. – Ali’s response to when people tell him to stop boxing. This was Ali’s last interview on the Parkinson show just before he had one last fight.”

26 “I’m gonna whoop George Foreman, and I’m gonna whoop him of all places in Africa in the Congo, where the Lumumba boys are!” – Referencing ‘The Rumble in the Jungle’ fight.

27 “A man who views the world the same at fifty as he did at twenty has wasted thirty years of his life.”

29 “My conscience won’t let me go shoot my brother or some darker people or some poor hungry people in the mud for big powerful America.”

30 “My way of joking is to tell the truth. That’s the funniest joke in the world.”