It has been an epic year of boxing. We had some excellent match ups and if there’s one thing that we learned, is that boxing is very much still alive and kicking. However, so is the dispute between rival promoters, which has deprived us of so many mouth drooling fights.

Hopefully, they can put their issues aside for 2013 and make the fights everyone wants to see, which will give an extra boost to the sport. Here are my top 5 dream fights for the new year. 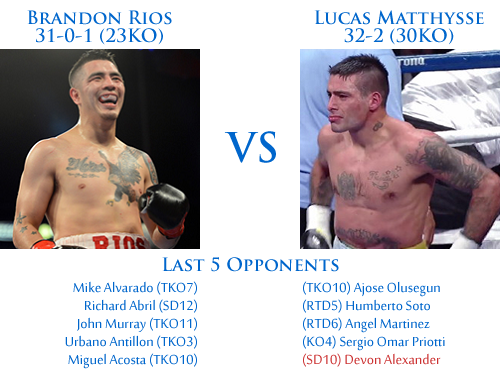 Rundown: What a fight this will be. Rios and Matthysse are both huge punchers  and good pressure fighters. Rios will probably come in as the favorite as he’s still officially undefeated, and the same can be said for Matthysse too if you don’t count the two controversial defeats in his opponent’s hometown.

Both have fought decent competition but Matthysse has been fighting at light welterweight (140lbs) far longer than Rios which gives him a slight advantage in that area. However, Rios seems stronger than ever since moving up in weight and stopping Mike Alvarado in a Fight Of The Year candidate.

Both fighters have a good chin, so the winner of this fight will be determined by who has the better defense and boxing skills. And that’s Matthysse.

We have yet to see Rios fighting on the backfoot or outbox anyone, while Matthysse arguably won his fights with Judah and Alexander not by brawling, but by using his boxing skills. He’s fully capable of mixing it up too. One thing is for certain, it’ll be a war. 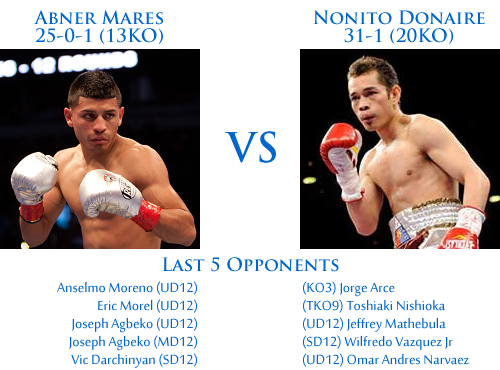 Rundown: Many people have been clamouring for Donaire to fight Rigondeaux, but I believe that Mares poses a bigger threat and is definitely a much bigger name.

Donaire and Mares has had a great 2012, but Donaire has been on a magnificent streak lately and doesn’t seem to be slowing down. He fought 4 times this year, all against top opposition while Mares has only fought twice, also against good opponents.

Mares can box and brawl, and he also has a high workrate. He will bang away to the body of his opponent and put on the pressure, but this will only just work to Donaire’s advantage.

Donaire is an excellent counter-puncher and possesses decent speed and power to match. Mares will probably be eating his fair share of counter punches as he comes forward, but fortunately he has a good enough chin to deal with it. 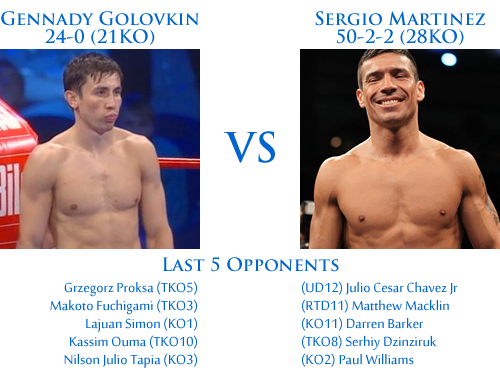 Rundown: We all know what Sergio Martinez has achieved in boxing lately is nothing short of spectacular. He’s taken the hard road and since coming to the US to fight, his name has gotten bigger with each fight. His epic battle and win over Julio Cesar Chavez Jr elevated his star power even more.

It seems that Gennady Golovkin is trying to repeat Martinez’s feats. He’s also coming to the US relatively late in his career and was very impressive in his last win on HBO.

Golovkin is a massive puncher but even though he’s well accomplished in his amateur career, he has yet to fight a top opponent as a professional.

This is quite a tough fight to call, but I feel that Martinez is on his way out and Golovkin is on the come up. Stylistically, it appears to be a bad match up for Sergio anyway, and we know that Golovkin has unreal power as said by his victims and sparring partners, and if it’s true that he’s never been dropped as an amateur or pro, then it’s fair to say that his chin is solid also. 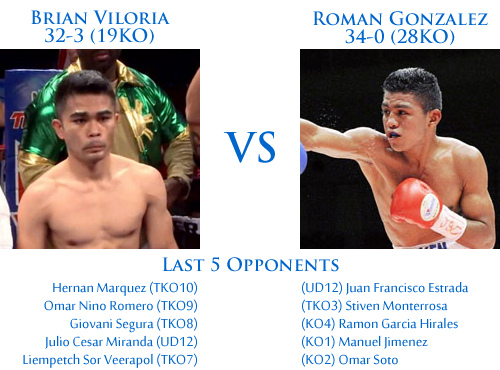 Rundown: Out of all of the mentioned fights, this fight is probably the most likely to happen because they’re not caught up in the silly rivalry of promotion companies.

Viloria has just come off an exciting win over Hernan Marquez in a Fight Of The Year candidate and as for Gonzalez, it has been business as usual, winning all four of his fights in 2012 to remain undefeated.

Viloria and Gonzalez are both battle tested, though Viloria has faced the better opposition. Both have good power (especially Gonzales) and a wide punch selection which they’re willing to display in combinations.

There have already been talks about this fight and it’ll be a shame if it comes off but doesn’t get picked up by a major network, because of the fact that they fight in the junior flyweight/flyweight division. It’s practically guaranteed to be an exciting fight.

Gonzalez will have to move up in weight again and has yet to prove if his power will have the same effect. On the other hand, though Viloria has been looking impressive lately, he has been in his share of wars and may be at the tail end of his career. Gonzalez has a high workrate and should be able to outwork and eventually break Viloria down. 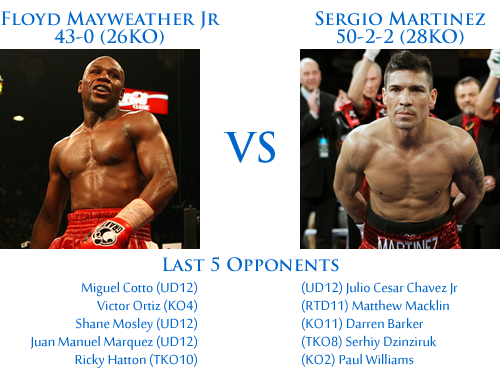 Rundown: The P4P king Floyd Mayweather Jr as we all know is still undefeated, and one of the best defensive fighters of all time. He has only fought once this year against Miguel Cotto, winning in a hard fought fight. Since then, he went to jail, came out and has not fought since. The long layoff could be a problem against fellow P4P fighter Sergio Martinez.

Not only has Martinez been the more active fighter, but he’s also the bigger man. If this fight were to happen, it would take place in the light middleweight division where Floyd has only fought once.

However, even though Martinez has fought in that division many times before, he’s already well-established at middleweight so it may be tough for him to go down in weight (even though he insists he can make the weight to fight Floyd).

There are so many factors involved in this fight but that’s what makes it so intriguing. As mentioned above, Martinez appears to be on his way out, but Mayweather has been so inactive recently that it may have harmed him.

Plus there will be a noticeable size difference and they’ve never fought any style that comes close to each other’s. It’ll be interesting to see who will be the smarter and faster, not to mention more fresh of the two.