Samuel Ha
Boxing TrainingFighter AnalysisVideos
Some fighters have a warriors mentality and they’re willing to fight to the end, no matter the cost. This may bring them fame, fortune and respect, but unfortunately, it can also bring them permanent damage, physically and mentally as shown in the worst beatings in boxing from 2010-2012. 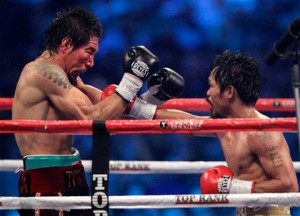 Manny Pacquiao ascension through the weight divisions was nothing short of spectacular. In his very first fight in the Junior Middleweight division, Pacquiao took on his biggest opponent to date.

Antonio Margarito who was coming off a loss to Shane Mosley in a bout that was marred with the hand-wrap controversy and a less than impressive victory shortly after, was thought to be a step too far for Pacquiao.

However, come fight night, Pacquiao used his superior foot movement and blistering combinations to absolutely pulverized Margarito, who had virtually no defense.

Margarito plodded forward trying to trap Pacquiao on the ropes but was eating a lot of leather to do so and the longer the fight went, it was apparent that Margarito was fading.

There was a sense that the fight would be stopped but Margarito pleaded otherwise, and if it wasn’t for the fact that he had such a great chin and a reputation for withstanding punishment, the fight probably would’ve ended sooner.

In the end, Margarito had to be sent to the hospital to undergo surgery to a right orbital bone fracture. His right eye would forever be damaged which was visually apparent by a droop. 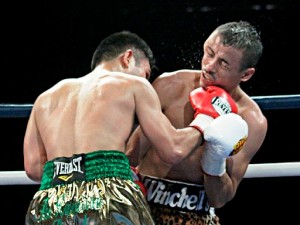 Giovani Segura was riding the wave on a string of impressive victories including two stoppages over the previously undefeated Light Flyweight masterful boxer Ivan Calderon.

On the other hand, Brian Viloria’s career was filled with ups and downs, but he had managed to win another world title and was now faced with a challenge from Segura who was moving up in weight to try to take his belts.

Going into the fight, Segura was the favourite to win and many thought that he would pressure and wear down Viloria, very much like many of his other opponents.

However, Viloria displayed wonderful counterpunching skills while Segura plodded forward with no technique or game plan. Viloria landed punches at will, most notably his left hook which began to cause a swelling to Segura’s right eye from the 3rd round onwards.

Another counter left hook in the 8th round caused Segura to stagger and the referee stepped in to stop the fight. It was a good stoppage because by then, the huge hematoma that had developed became so bad it looked as though he had another head growing on the right side of his eye. Only time will tell whether Segura will ever be the same again. 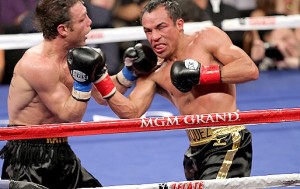 In one of the most highly anticipated action fights in boxing of 2011, Mexico’s Juan Manuel Marquez went up against the hard punching Australian brawler, Michael Katsidis.

Marquez, an elite and experienced boxer blessed with amazing counter punching  and combination punching skills, had slowed down enough for many to believe that Katsidis, who was coming off an impressive TKO victory, would be too much for the aging Marquez to handle.

News broke out that Katsidis’ brother had passed away before his scheduled fight, but Katsidis was to use this tragedy as motivation and went ahead with the fight.

Both fighters weren’t afraid to go to war and that’s exactly what they did from the opening bell. Katsidis opted to come forward while Marquez decided to fight on the backfoot.

It was a ‘phone booth’ fight where both fighters fought in close, and when Marquez was dropped by a short crisp left hook in the 3rd, many thought it would be over for the legendary Mexican.

Like many times before, Marquez weathered the storm and went back to his precision counter punching and slowly but surely, he was taking Katsidis apart. Katsidis had barely taken a step back until the 9th round, where he was visibly worn out and he’s engine was just running on fumes.

Kenny Bayless, the referee had seen enough and saved Katsidis from Marquez, and ultimately himself. After, despite still having a warrior’s mentality, Katsidis was physically damaged to the point where he would never be the same again. 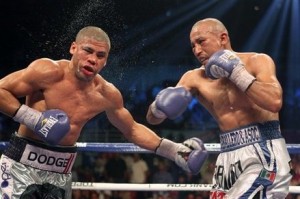 On April 16, 2011, Mexico’s Orlando Salido caused a huge upset when he traveled to Juan Manuel Lopez’s backyard of Puerto Rico to stop him in the 8th round.

It was somewhat of a controversial stoppage and it also emerged that Lopez was going through personal problems before the fight and wasn’t training properly. Because of these issues, many felt that a rematch was justified.

The rematch was yet again, held in Puerto Rico. This time around, Salido was the champion and it was more of an even fight.

Lopez was in top physical condition but opted to box more instead of brawl while Salido came with the same game plan of intelligent pressure but also added more punches to his arsenal.

Round after round, Salido landed the harder punches and Lopez retreated throughout trying to counter punch. He was to be successful when he landed a short right hook dead on the chin of Salido towards the end of round 5.

Despite the knockdown, it was clear that Lopez had no choice but to brawl, so he went to war with Salido which produced two spectacular rounds, the 8th and 9th. Just before the bell rang in the 9th, Salido landed two huge hooks in which Lopez staggered back to his corner.

It was a sign of things to come as shortly into the 10th round, after a series of hooks and uppercuts, Lopez got dropped as his head bounced around violently.

Enough was enough, and the referee called an end to the fight despite Lopez getting up before the 10 count. It remains to be seen whether Lopez has anything left after this fight, but one things for sure, he lost a part of himself in the ring that night. 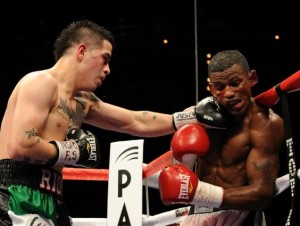 Everyone knew that Mexican American, Brandon Rios, had the heart of a lion, an iron chin and heavy hands.

However, he was still unproven going into his first world title bout with Venezuelan, Miguel Acosta who was also a heavy handed fighter but with better movement.

For the majority of the first 5 rounds, Acosta used the entire ring to his advantage and peppered the advancing Rios with hard punches time and time again.

Acosta even staggered and hurt Rios on several occasions but Rios just smiled, and continued to apply pressure, backing Acosta onto the ropes more and more.

The pressure was getting to Acosta and he was dropped with a hard stiff jab in round 6 and was dropped again in round 8 as he was trying to move away from Rios’ right hand.

Then came the 10th round. Although Acosta fought of the ropes effectively everytime he was pinned there, he had slowed down to the point where his reactions had diminished and his ability to take a shot was far gone.

After trying to fight off the ropes again, Rios landed several big right hands which caused Acosta to slump down on the ropes and he was literally sent to sleep. Since then, Acosta has not regained his top form and consequently suffered a series of back-to-back losses.